Tarawa, one of the Gilbert Islands, was targeted by the US as the first stepping stone in the drive across the central Pacific that had been planned since just after WWI. It marked a new kind of amphibious operation for the Americans, landing on a small atoll into the teeth of Japanese defenses, and far from land-based air support. The assault on Tarawa, and the simultaneous attack on nearby Makin,1 involved approximately 200 ships, 27,600 assault troops, 7,600 garrison troops, 6,000 vehicles and 117,000 tons of cargo. 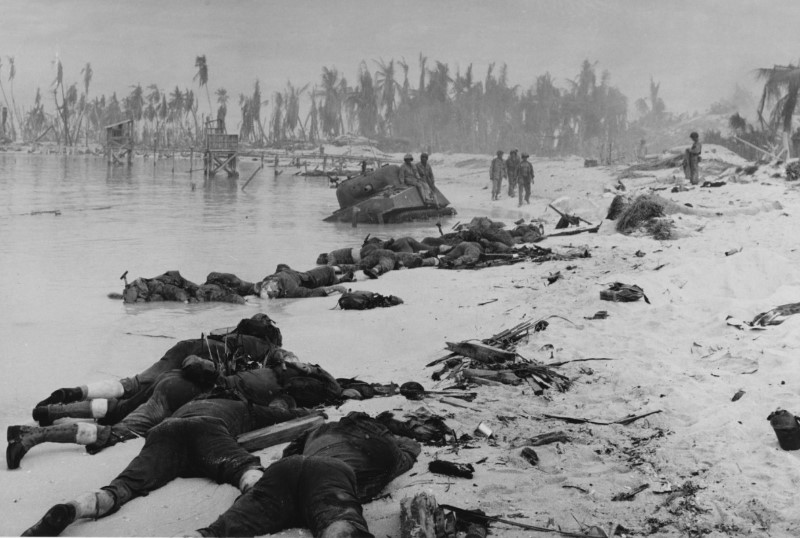 The troops who landed on Betito Island, the fleck of Tarawa with the all-important airfield, belonged mostly to the 2nd Marine Division, staged out of New Zealand. They were carried to their target by the Southern Attack Force under Rear Admiral Harry W Hill. This force of 16 transports, 3 battleships, 5 cruisers, 5 escort carriers, 21 destroyers, 2 minesweepers, 1 LSD and 3 LSTs began landing operations early on the 20th of November, 1943. 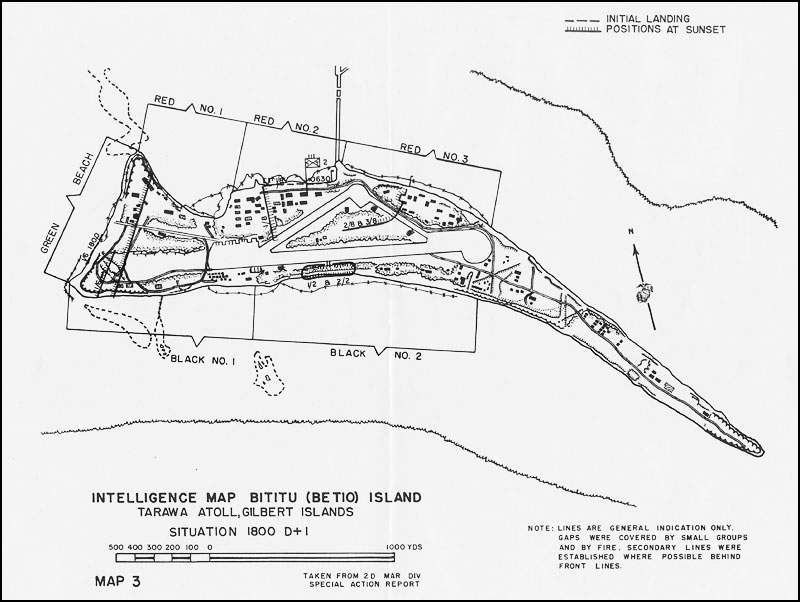 There were three sets of suitable beaches, designated Black, Green, and Red. Black was on the outside of the atoll,2 while Green was on the end of the island, and Red faced the lagoon. The US had done extensive reconnaissance,3 and the heavy defenses on Black and Green meant that Red was selected as the landing site. This did mean that the run-in from the ships to the beach would be very long, but it couldn't be helped. 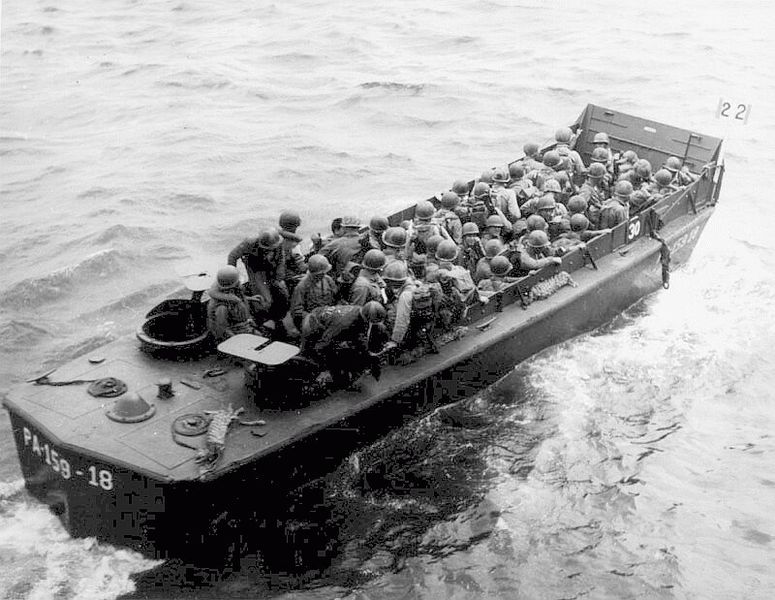 The transports began lowering their boats at 0355. The troops mostly went into LCVPs, 36' boats designed to carry 36 men or a jeep onto a beach and offload them over a large ramp in the front. The first four waves, though, rendezvoused with the LSTs to transfer their troops.

The Landing Ship Tank, or LST, was one of the ships designed at Churchill's request as part of his plan to retake Europe. It was a 5,000 ton seagoing vessel designed to run onto a beach and unload about 20 tanks directly, although in practice they were more often used to carry trucks and cargo. In this case, the LSTs carried a vehicle that would be the key to Tarawa. 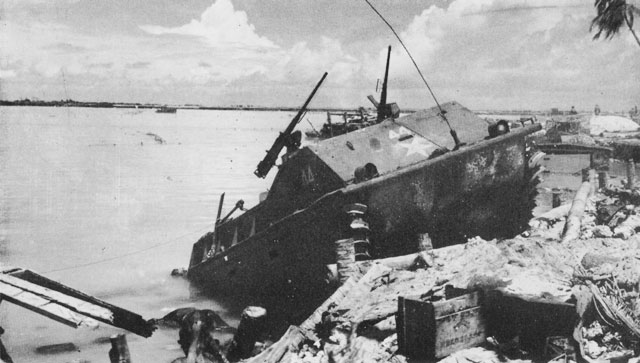 LVT knocked out on Tarawa

The Landing Vehicle Tracked (LVT) had its origins in a craft designed to rescue crashed pilots from the Florida Everglades. It was an amphibious vehicle, propelled by tracks both in the water and on land. It wasn't particularly good in either environment, but it could crawl across reefs and drop its 24 passengers off on dry ground. 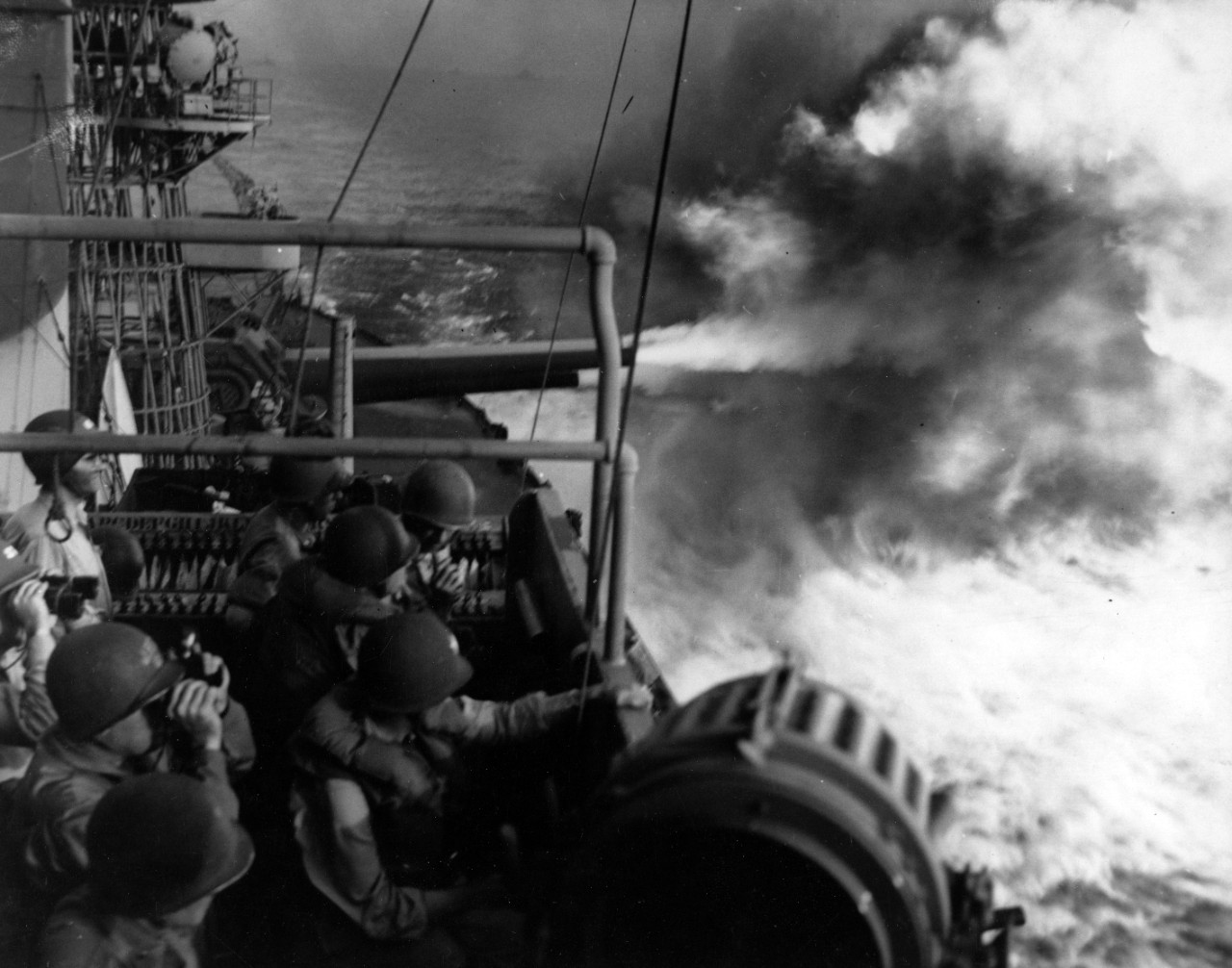 The action began at 0503, when a Japanese gun opened fire on the battleship Maryland, flagship of the task force. For the next hour the warships dueled with guns ashore, until an air strike from the fleet carriers forced them to check fire. Then the scheduled bombardment began, about 3,000 tons of naval projectiles landing on the island in the space of 70 minutes, along with more aerial munitions. The Americans expected this would be enough to daze the defenders, but they had badly underestimated the toughness of the Japanese fortifications. Their coconut log and coral dugouts withstood all but direct hits, although the bombardment did silence most of the heavier Japanese artillery and disrupt communications. 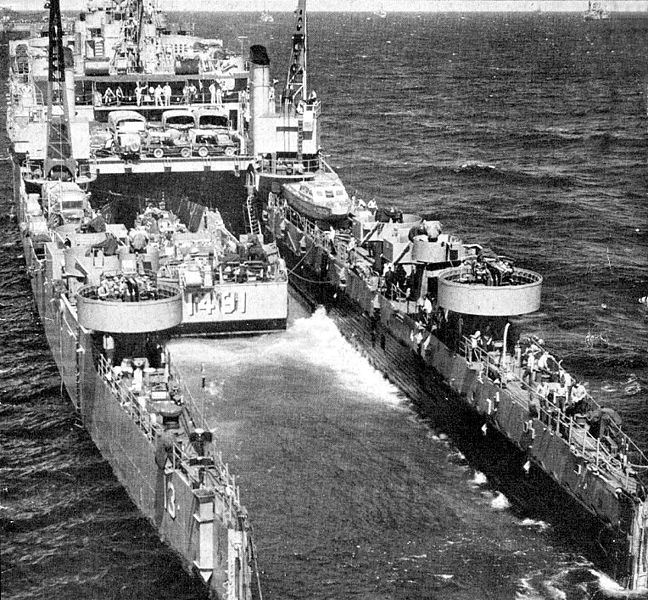 Under cover of this bombardment, minesweepers Pursuit and Requisite swept a channel from the transport area into the lagoon, then led in a pair of destroyers. These four ships provided all of the direct fire support that day, although in later invasions, such ships would be augmented by converted landing craft. The next ship in was the Landing Ship Dock (LSD) Ashland, a conceptual descendant of the Japanese landing craft carriers. She carried the tanks for the initial assault, loaded in LCMs, essentially larger LCVPs designed to carry a tank or two. 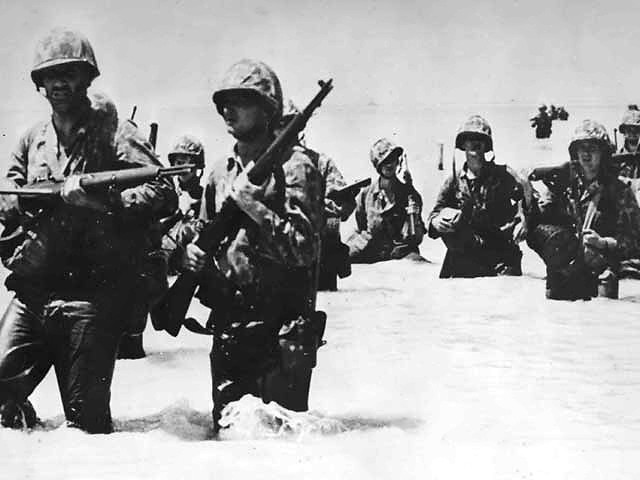 The first three waves, which were to land at three-minute intervals, were in the LVTs. Because of heavier than expected sea conditions, the LVTs were slow, and the first Marines, originally scheduled to land at 0830, didn't touch down until 0913. They were met by intense Japanese fire, and the unarmored LVTs suffered badly. They were unable to cross the seawall, and most of the Marines that did make it ashore were pinned down there. Worse, the planners had not been able to predict the tides accurately, and November 20th had no high tide. This meant that all of the landing craft except the LVTs were stuck on the reef about 500 yards offshore. A few tanks managed to wade ashore, but they were not used very effectively, and most were quickly knocked out. 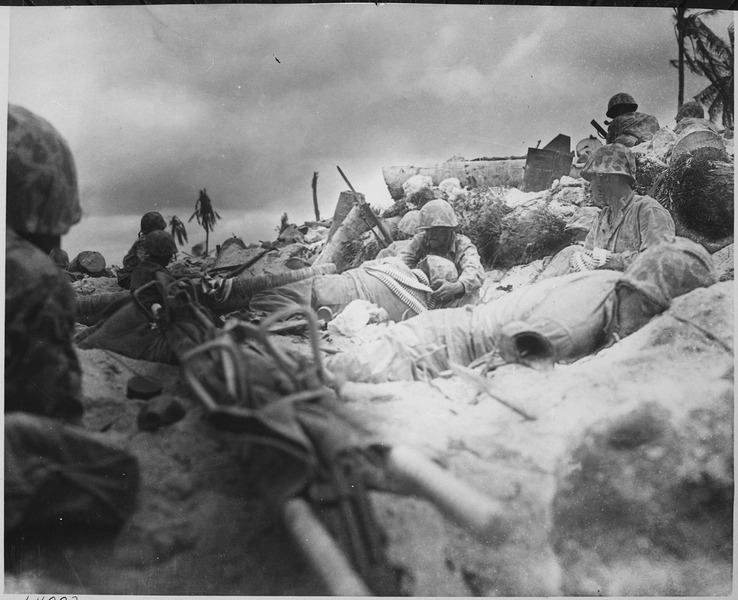 The situation that developed was one of the worst in the long and illustrious history of the United States Marine Corps. About 1,500 men were trapped on a narrow strip of beach, while thousands more were stranded offshore. Those ashore slowly knocked out the Japanese positions with flamethrowers and TNT, their rifles and grenades proving mostly ineffective. Worse, the complexities of the amphibious operation meant that almost all of the troops, equipment, and supplies intended for landing on the first day were in their boats before the first wave ran into trouble, making it difficult for the Marines ashore to get the support they needed. The transport commanders stuck to the unloading plan and by midafternoon there were 100 landing craft full of unwanted supplies milling about in the lagoon. By the end of the day, 5,000 men had gotten ashore, and 1,500 of them had become casualties.

The tide finally turned, both literally and figuratively, by noon the next day. Reinforcements had been trickling in all night, but the added impulse of the fresh landings meant that the Marines could break out and begin to clear the island. 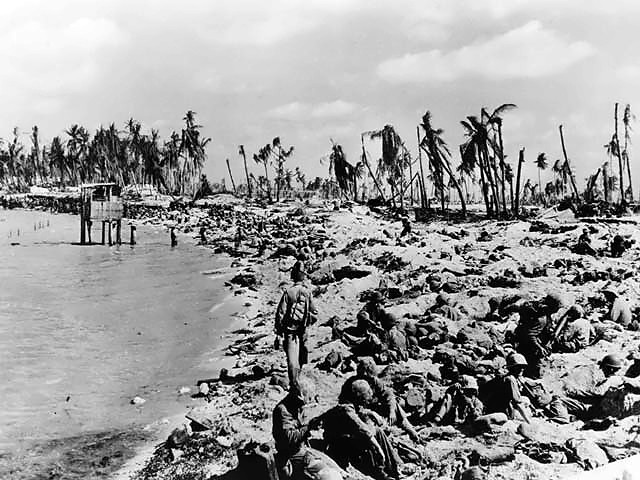 One of the beaches after the battle

Tarawa was not the largest or most sophisticated operation of the war, but it was a vital one on the long road to Tokyo Bay, and a good example of the sophisticated techniques required to seize a heavily defended beachhead. Next time, I'm going to cover the operations that took Allied forces deep into Germany and to the doorstep of Japan.

If I haven't managed to satisfy your hunger for details on US landing doctrine, here are some manuals.

1 I'm not going to cover Makin for reasons of space, and because it was a much less difficult fight than Tarawa. ⇑

2 An atoll is basically a ring of coral, with a lagoon in the center. In some areas, the coral pokes above the sea surface, forming islands, while areas of lower coral form gaps in the ring that allow ships to enter. ⇑

3 The US guessed to within 64 men how many defenders there were. They got a good photo of the Japanese outhouses, and by working out how big they were, how many holes that meant they had, and then looking up how many men per hole Japanese doctrine called for, they made a very accurate estimate. ⇑