Warning: Undefined variable $out in /home/public/wiki.obormot.net/cookbook/footnote2.php on line 97

In the early 60s, the US military faced a serious problem. Much of its firepower was tied up in manned strike aircraft, but these aircraft were increasingly vulnerable to surface-to-air missiles like the Soviet SA-2 Guideline. Any effective air campaign would require the destruction of the SAM sites, but existing methods of attacking SAM sites, such as iron bombs and short-range missiles, were extremely dangerous. Fortunately, China Lake, the Navy's main center for developing aerial weapons, had the idea for a missile that would home in on the SAM's own radar emissions. This neatly solved several problems. The attacking aircraft could launch from greater range, and without having to get the precise position of the target. Simply lob the missile towards the SAM site, and it would find and attack the radar on its own. 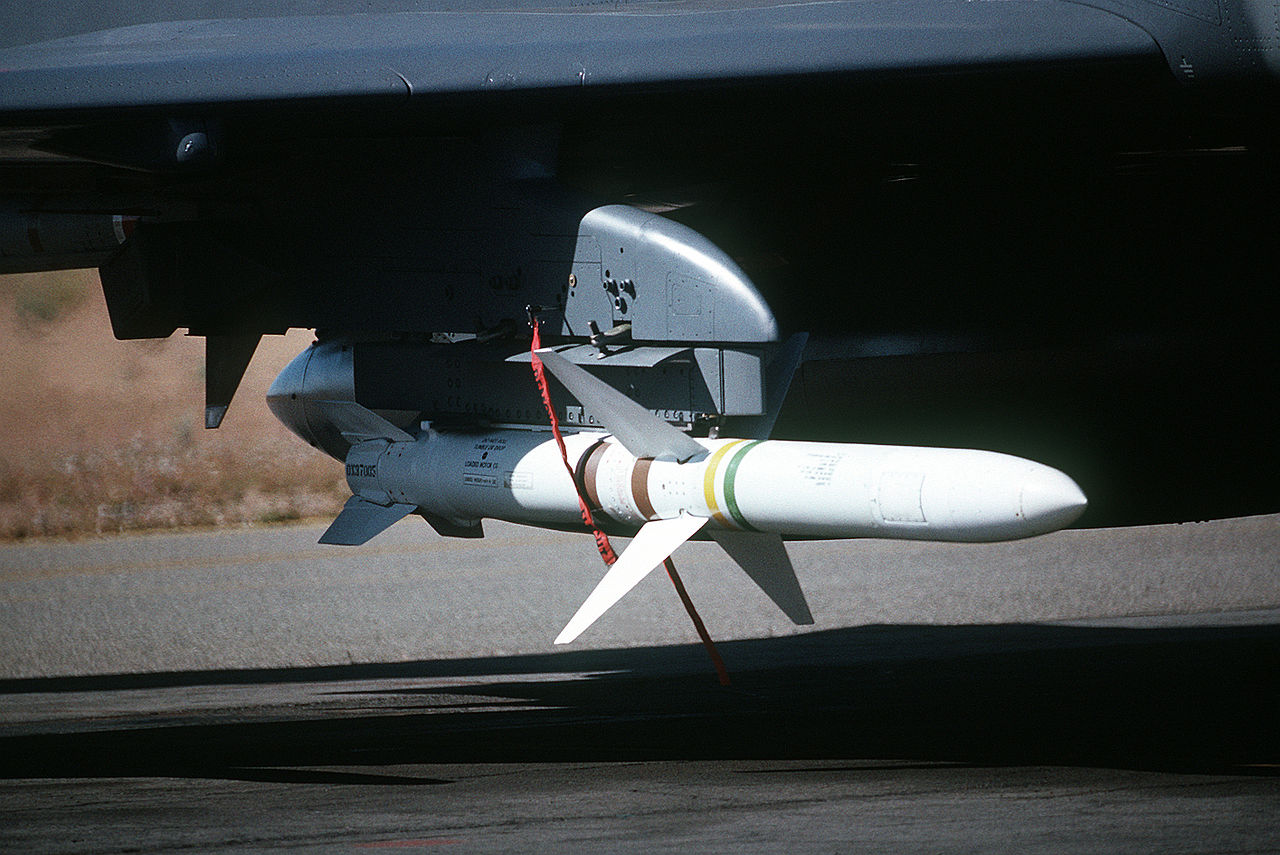 The first weapon of this new type, dubbed anti-radiation missiles, was the AGM-45 Shrike. It was based on the airframe of the AIM-7 Sparrow air-to-air missile, but with a new seeker designed to track the Fan Song radar of the SA-2 and a different warhead and rocket motor. This weapon was in use over Vietnam almost as soon as it entered service, and proved a significant improvement over previous methods of shutting down SA-2 sites, although it had a number of drawbacks. 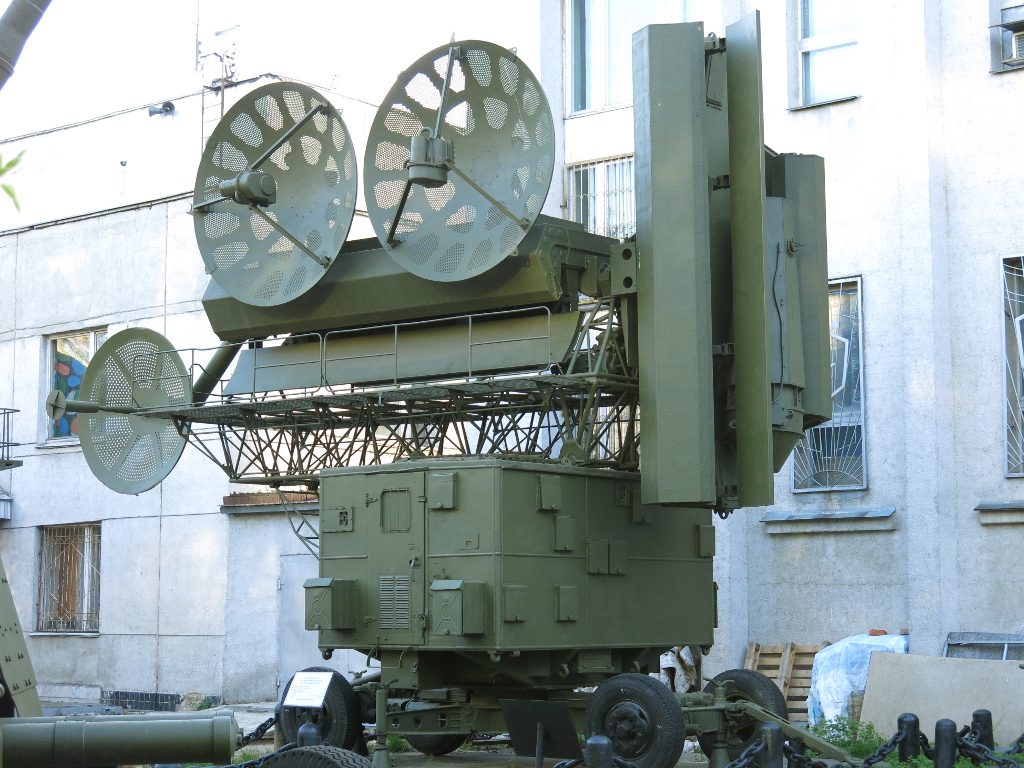 First, it didn't have the range to attack from outside the SA-2's envelope, which made using it a rather perilous task. Second, it was fairly slow, and launching one in reaction to an incoming SAM produced posthumous revenge at best. Third, the seeker had a narrow field of view, and had to be launched on an almost perfect trajectory to pick up the Fan Song's signal. Fourth, the seeker was hard-wired for a particular band of radar signals, so each type of radar needed a new seeker. This meant that the strike planners had to guess at the types of radars the package would encounter, and guessing wrong could leave the Suppression of Enemy Air Defense (SEAD) aircraft without their most potent weapon. Fifth, the warhead was fairly small, and had an annoying tendency to just tear up the radar antenna, damage that was easily repaired. Lastly, Shrike's primitive guidance system had no memory, and could be defeated by simply shutting down the radar. This wasn't entirely a bad thing, as it also neutralized the SAM site, but the radar would be back on the air within a minute or two, leaving the Wild Weasels to repeat the process. 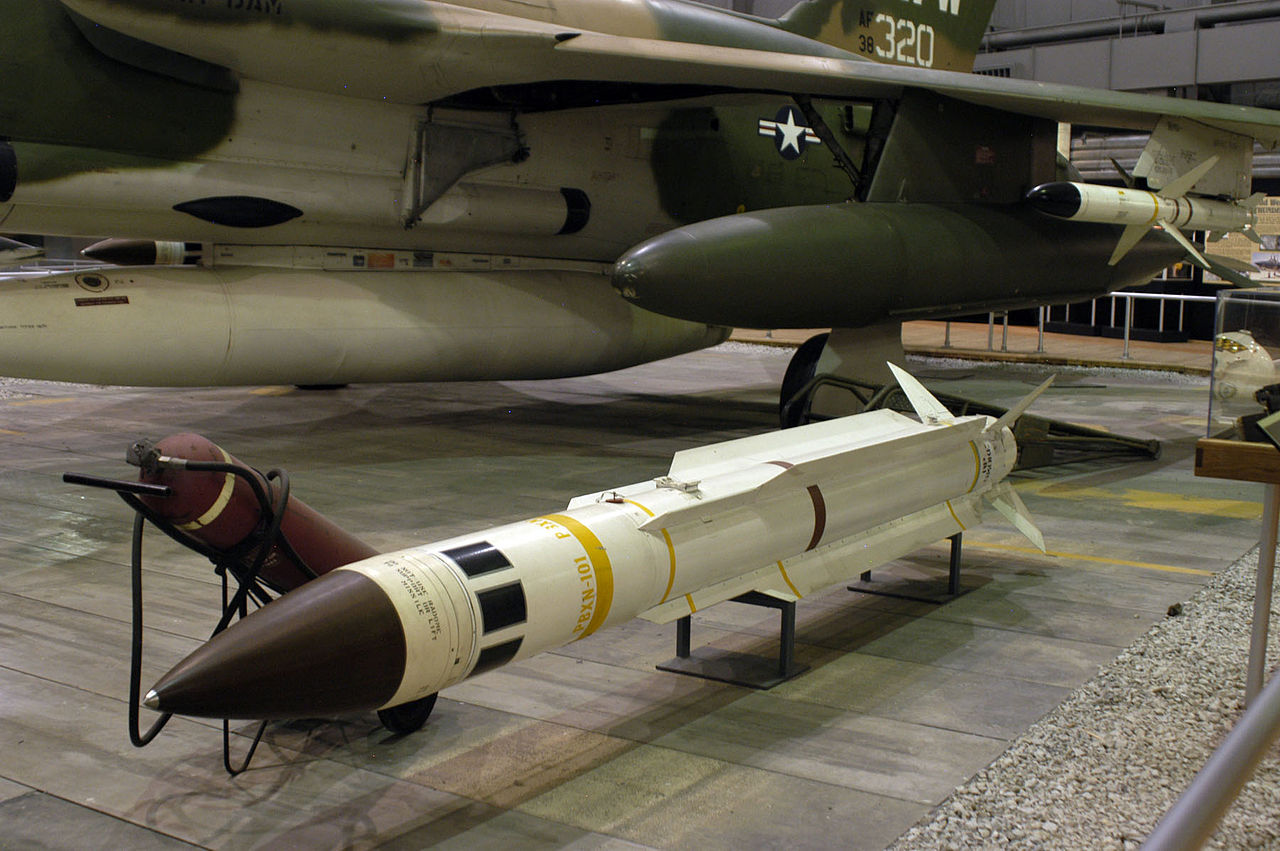 Growing losses over Vietnam led the Navy to request an improved ARM, and one was developed in only a year using the ship-launched RIM-66 Standard SAM as a basis. The first version of the AGM-78 Standard ARM was essentially just an RIM-66 with a Shrike seeker bolted on and a few modifications for aircraft carriage and launch, although the seeker was gimballed for a better field of view. The Standard motor did give it twice the range of Shrike, and the warhead was significantly more destructive. The next variant, the AGM-78B, was a major improvement, with a broadband seeker, removing the need to carry specialized missiles for each radar that might be encountered, as well as a simple memory circuit which kept the missile heading more or less towards the radar even if it shut off, and greatly increased the odds of reacquiring it if it came back on. The drawback was that Standard ARM cost about 30 times as much as Shrike, so the earlier missile continued to see wide service throughout Vietnam and into the 80s. 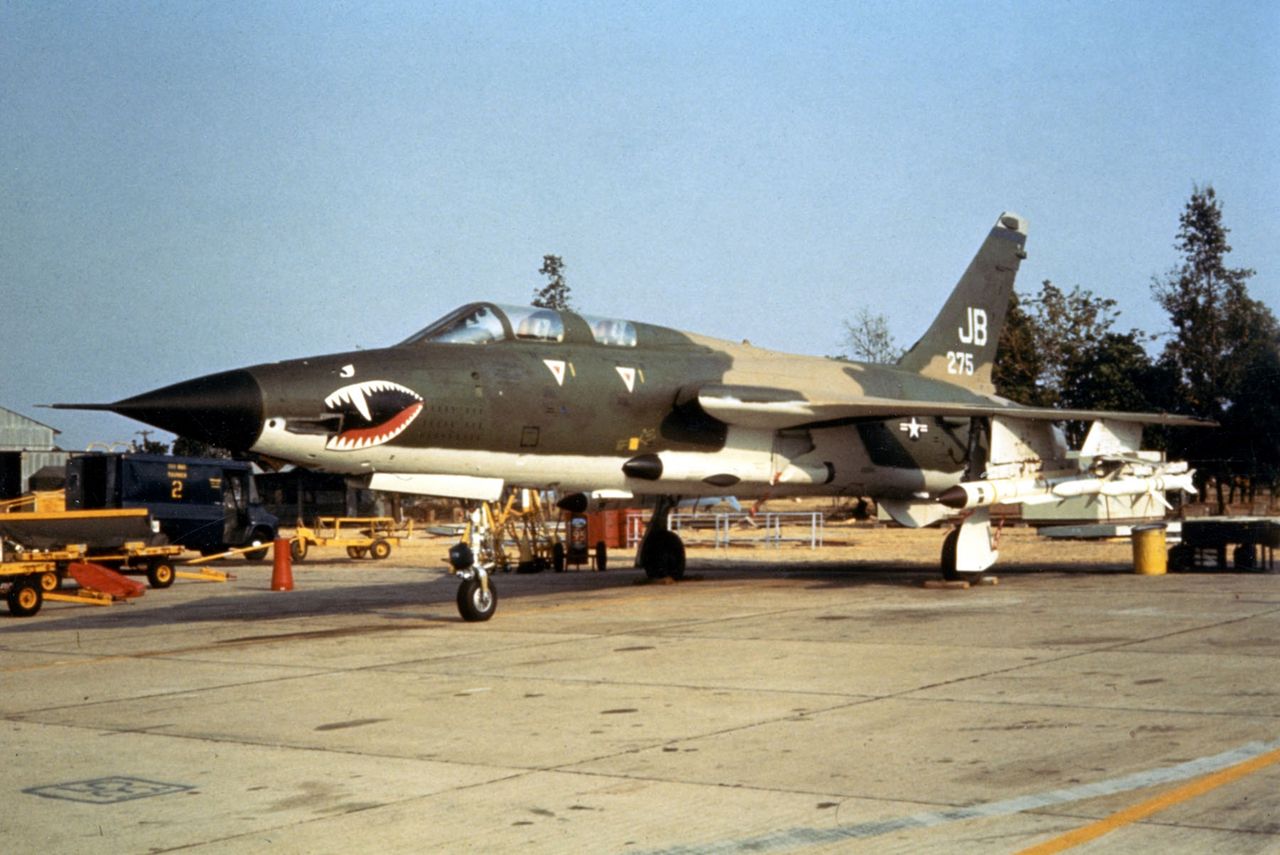 F-105G Wild Weasel armed with Shrike and Standard in Vietnam

Because of the limitations of existing missiles, the Air Force and Navy wanted something better. Key objectives of the project, started in 1969, were: high speed, to reduce the amount of time operators had to shut down radars, a better warhead, and a broadband sensor. As a result, the project was named High-speed Anti-Radiation Missile (HARM). The ambitious specifications meant that it took the USN and Texas Instruments fifteen years to put the AGM-88 into service, but the result was a splendid weapon. Against pre-planned targets, it could be launched on a lofted trajectory to a range of 80 nm, with the seeker switching on over the target. Either the launching aircraft's radar warning receiver or the HARM's own sensors could also be used to attack targets on the fly, even behind the launching aircraft, although the range is somewhat reduced in this mode. The warhead was also improved, with extra fragmentation to make sure it damaged more than just the antenna.

The HARM first saw action in 1986, and has since become a common part of America's aerial arsenal. About 2,000 were fired during the Gulf War, one of which was accidentally launched at the tail radar of a B-52. It hit the bomber, which managed to return to base, and was subsequently named In HARM's Way. The codeword "Magnum" was generally used to signal the launch of an ARM, and pilots soon discovered that simply saying "Magnum" was enough to get the enemy, listening to their unsecured radio nets, to shut down their radars. The first HARMs had preprogrammed seekers, requiring each user to keep a stock of extras with different programming on hand, but the AGM-88B removed this limitation. The AGM-88C had an improved signal processor and a new warhead with tungsten fragments that greatly improved lethality. HARM was also one of the first weapons where new capabilities were added via simple software updates. A notable addition was the Block V update, which turned the HARM into a weapon capable of homing on jamming transmitters as well as conventional radars. The AGM-88D added GPS guidance, which could in theory turn HARM into a general ground-attack missile, but was usually used as a backup to improve accuracy if the radar shut down, opening new targets that previously would have posed unacceptable risks of collateral damage if the radar was turned off. It also allowed some areas to be designated as "no-shoot zones", minimizing the risk of friendly fire. 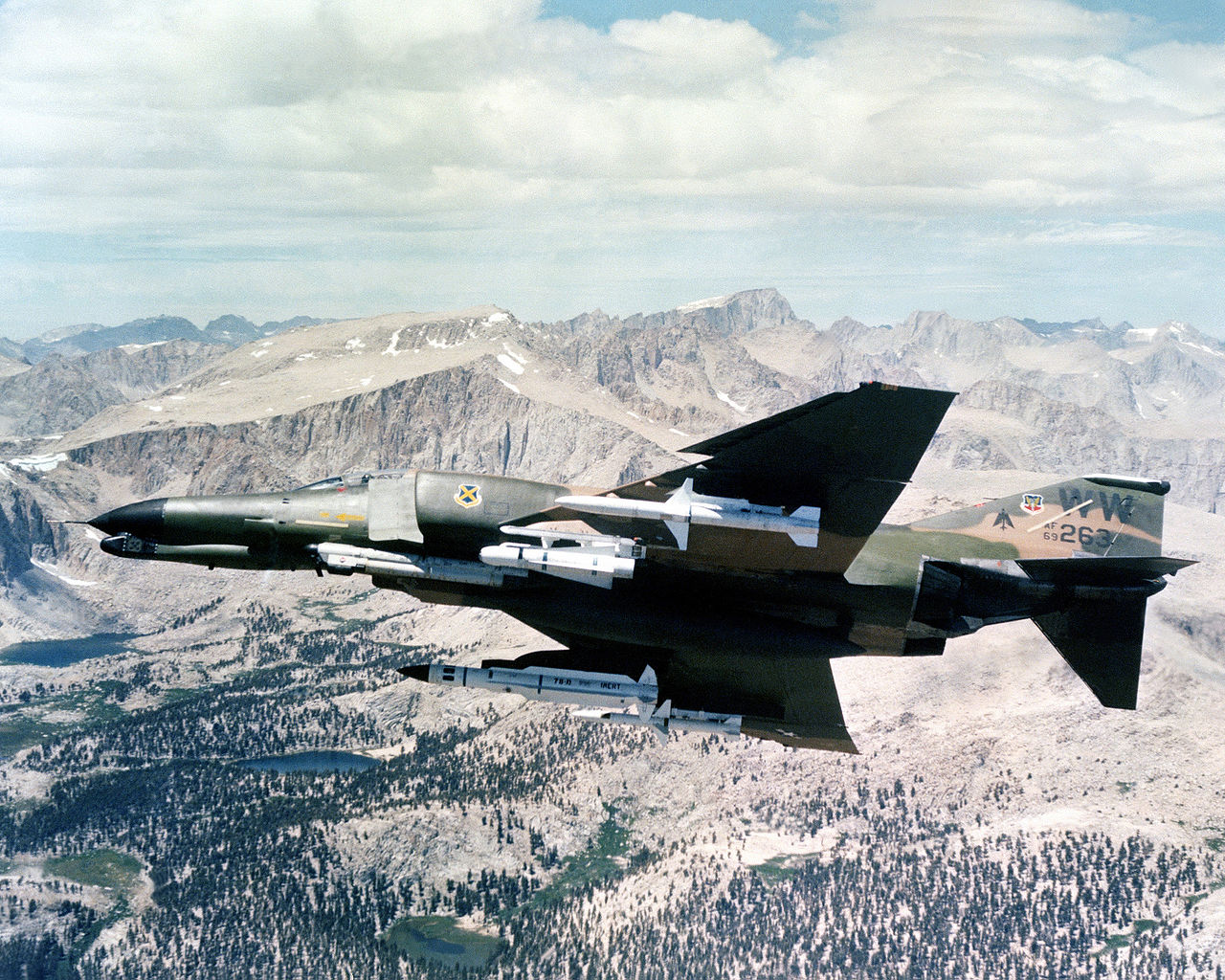 F-4G Phantom II Wild Weasel with one each of Shrike, Standard, HARM and Maverick

In recent years, HARM development has continued, with the AGM-88E AARGM (Advanced Anti Radiation Guided Missile) resulting from a collaboration between the US and Italy. The biggest improvement for this weapon was the fitting of an active millimeter-wave seeker, which allows the missile to classify and kill the radar van instead of the transmitter antenna, as well as the capability to send back data from its various sensors in the seconds before impact, making it easier for planners to figure out if it had actually killed the target. The Air Force passed on the AGM-88E, deciding to build the very similar AGM-88F for reasons that nobody can quite understand. But the Navy has pressed on with the AGM-88G, which integrates the forward body of the AGM-88E with a new ramjet-rocket to double the missile's range. The future is bright for HARM, with over 20,000 produced and exported to 15 nations in addition to the US military. 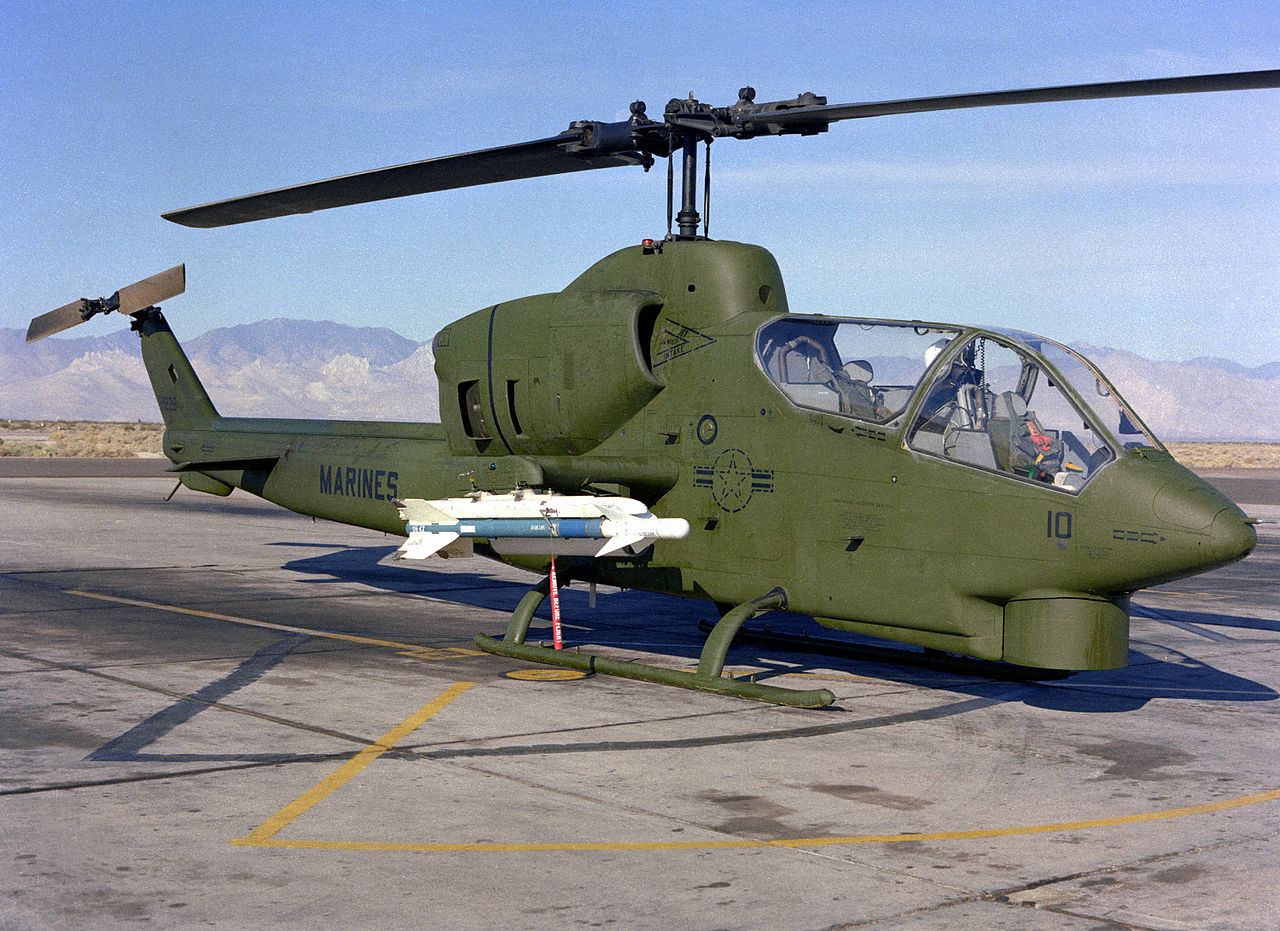 While HARM and Shrike are the most successful of the ARMs, they are hardly the only missiles in this category. The last one in US service is the AGM-122 Sidearm, a Sidewinder missile converted into a simple ARM and used primarily by helicopters. The British, when faced with the need for an ARM, built ALARM, with the unique capability to loiter if the target radar is switched off. In loiter mode, the missile deploys a parachute, then waits for several minutes for the radar to come back on. If it does so, a secondary rocket motor sends flying into the target. If not, ALARM self-destructs harmlessly. Nor are all ARMs air-to-surface. The Soviets built ARM capability into both the SA-2 SAM, to counter jamming aircraft, and the R-27/AA-10 air-to-air missile, to take out NATO AWACS aircraft. Many anti-ship missiles are fitted with a secondary home-on-jam mode to disrupt enemy electronic warfare efforts, and the USN made extensive use of the Standard ARM as a surface-to-surface weapon before Harpoon reached the fleet. 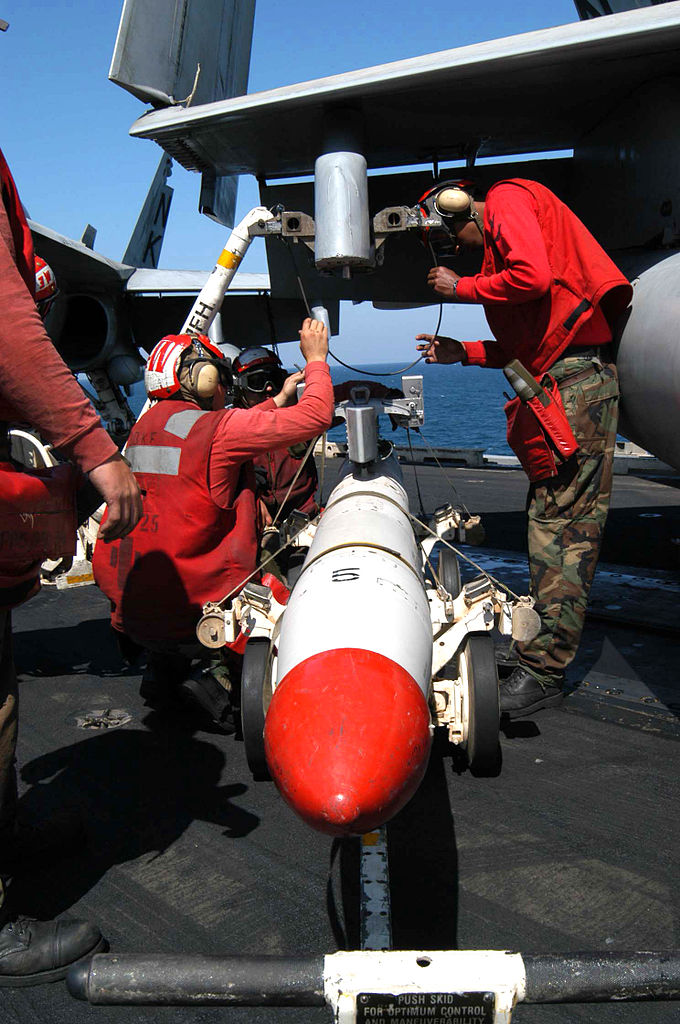 ARMs are a vital part of efforts to counter enemy air defenses and open the way for strikes on defended targets. But they are only one part of these efforts, which require the integration of ARMs, electronic warfare platforms and increasingly the use of smart decoys. We'll take a look at those next time.