Warning: Undefined variable $out in /home/public/wiki.obormot.net/cookbook/footnote2.php on line 97

Warning: Undefined variable $out in /home/public/wiki.obormot.net/cookbook/footnote2.php on line 97
 Naval Gazing Main/Revolt of the Admirals Part 2

Revolt of the Admirals Part 2

In late 1949, the Navy was in trouble. The Truman Administration's focus on economy in defense budgets, and the Air Force's monopoly on nuclear delivery, had left the Navy vulnerable, particularly as the Secretary of Defense, Lewis Johnson, was a longtime proponent of air power. One of Johnson's first acts was to cancel the new supercarrier United States, leading to the resignation of the Secretary of the Navy and the appointment of Francis Matthews, who had no qualifications for the job and no interest in protecting the Navy. Instead, the chosen instrument of US power would be the B-36 Peacemaker strategic bomber, which Johnson and the Secretary of the Air Force, Stuart Symington, were reported to have a financial interest in. These rumors, and the growing interservice tension, prompted Carl Vinson, powerful chairman of the House Armed Services Committee, to hold hearings. 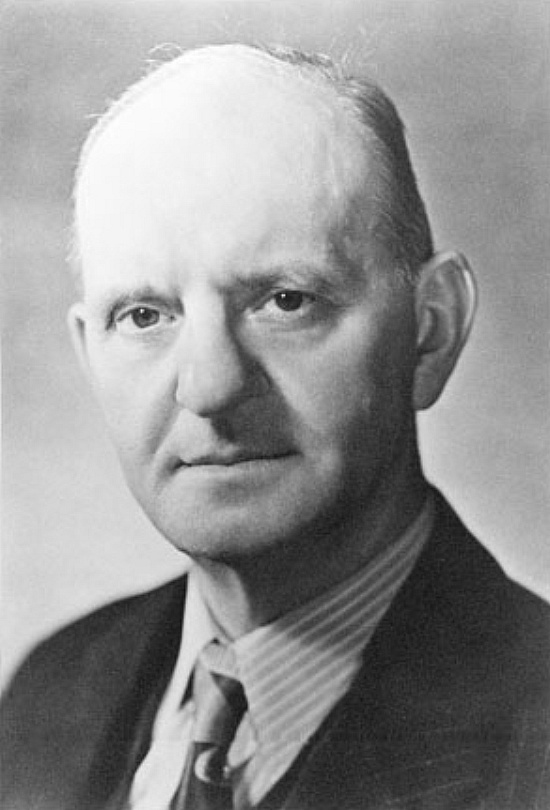 The Navy's preparations for the hearings were badly hindered by internal divisions. Previously, most of the bureaucratic infighting had been handled by Admiral Arthur Radford, Vice Chief of Naval Operations. Radford, who had commanded one of Halsey's carrier groups in WWII, was a much more vigorous advocate of the Navy and particularly naval aviation than was the CNO, Louis Denfeld, who favored interservice harmony. In May 1949, he was appointed to command of the Pacific Fleet, leaving the Navy without strong leadership in the face of budget cuts that were increasingly falling on that service, and on the aviation community in particular. As a result, many in the Navy had accepted the cuts as inevitable, and no coherent strategy for putting the Navy case to the public or Congress had been formed. Radford, informed of this, flew back to Washington and met with Vinson, who asked his assistance in evaluating the Air Force testimony. 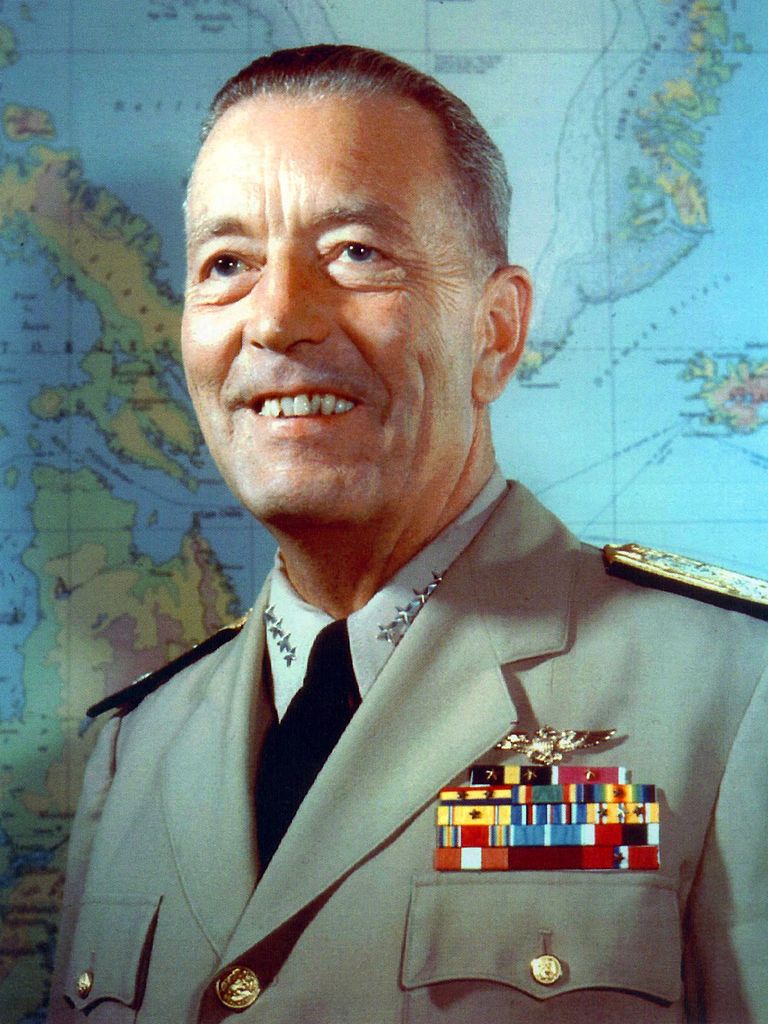 Vinson's hearings opened on August 9th, 1949, and the Air Force's leadership strongly defended the B-36, and specifically refuted the charges that Johnson and Symington had benefited financially from the B-36. They also repeated the claims that it was impossible to intercept, difficult to even detect, and capable of accurate bombing from high altitude. In late August, Worth admitted his authorship of the document, greatly damaging the Navy's ability to respond, as it was now thought by most to be part of an organized campaign by the USN against the B-36. Vinson ordered a recess in the hearings until October. 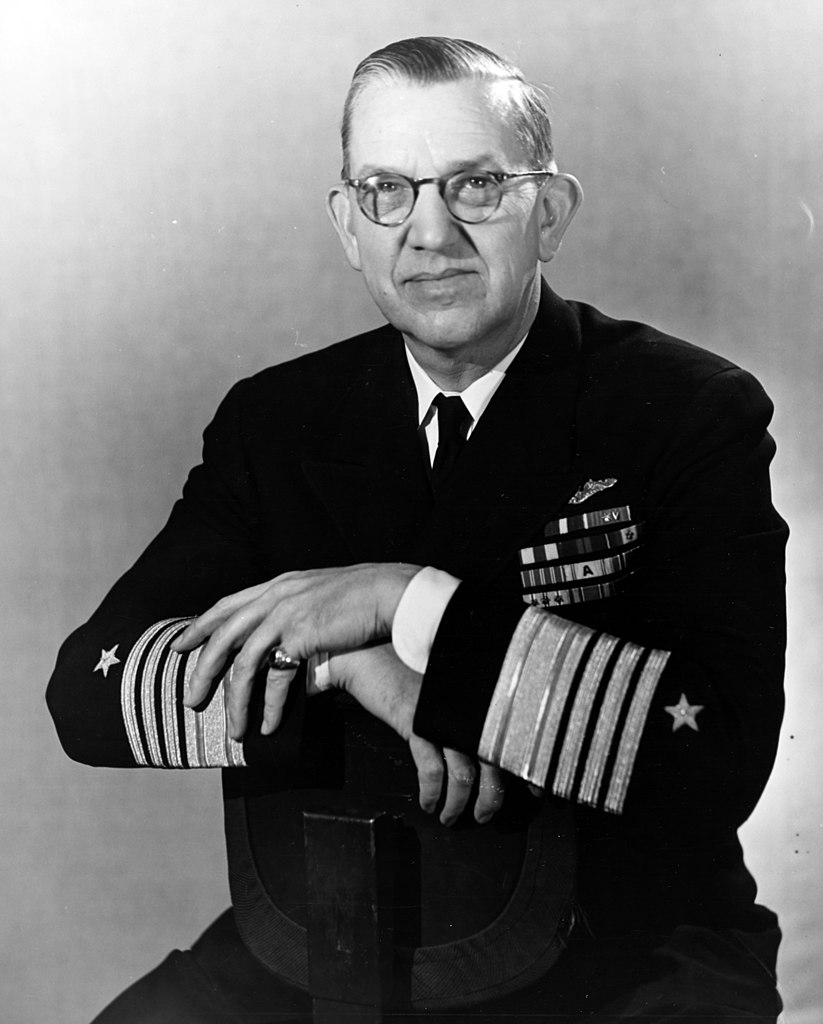 On September 3rd, a weather reconnaissance aircraft in Alaska picked up radioactive traces that soon turned out to be the results of the first Soviet atomic bomb test. This shook the American defense establishment to its core, coming a year before even the most pessimistic predictions had estimated the Soviets could build a weapon. Despite this, there was considerable speculation that the hearings would never be resumed, leaving the Navy without the chance to state its case. This would have been entirely satisfactory to the Air Force and the Truman administration, but many within the Navy objected. SecNav Matthews attempted to browbeat a group of admirals including Radford and Denfeld into postponing the hearings, but word accidentally leaked to the press. Captain Arleigh Burke had ended up as the de facto coordinator of the Navy's response to the hearings in his role as the head of the CNO's department for unification, known as OP-23, and he and his staff quickly became the focus of suspicion. They were tipped off before the Inspector General showed up, and managed to get a briefcase of sensitive files out before everyone was put on lockdown, with the interrogations lasting until 3 AM. Eventually, the case was suspended, and the officers sent home. 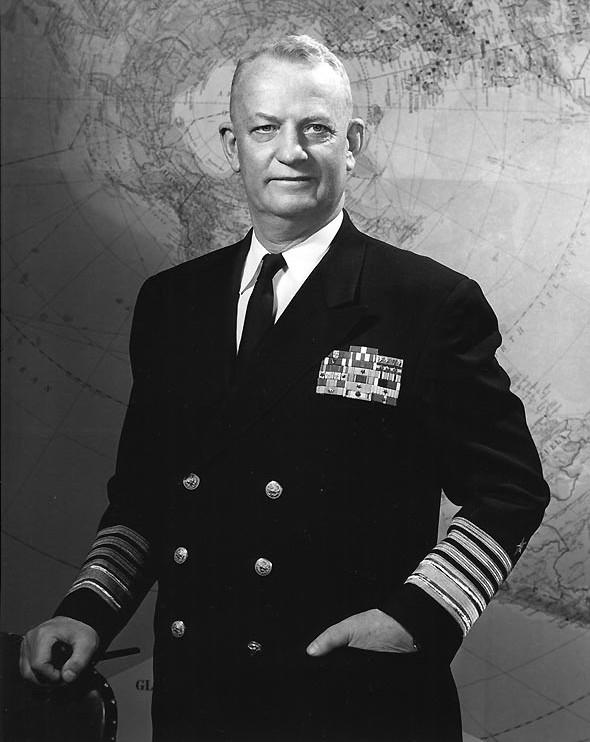 The hearings resumed on October 6th, with Secretary Matthews testifying that morale in the Navy was good, a claim greeted with public laughter from watching naval officers. He then claimed that Radford, scheduled to testify next, should do so in executive session (secret) for reasons of national security. After hearing Radford's testimony, the committee voted to have him repeat it in open session, a stinging indictment of the strategic vision behind the B-36. He was followed by a number of witnesses who called into question many of the Air Force claims about the B-36, including its invulnerability and accuracy. The last to testify was Denfeld, who had come under extreme pressure from Matthews before finally deciding to side with Radford and the other witnesses, mounting a strong defense of the Navy's role in a world where the Soviets had only a minimal fleet. "Fleets never in history met opposing fleets for any other purpose than to gain control of the sea—not as an end in itself, but so that national power could be exerted against the enemy." 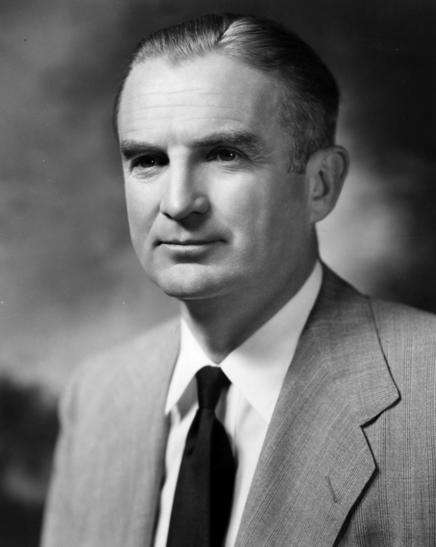 Air Force Secretary Stuart Symington, one of those who attempted to rebut the Navy testimony

This came as a shock to Matthews and Johnson, as Denfeld had previous been a fairly compliant participant in service unification. It was also a bombshell, underscoring the Navy's break with the DoD party line. The Air Force brass quickly rushed in to rebut the Navy claims, usually arguing from authority and in the face of the relevant (and usually conveniently classified) facts, and for some reason the Army representatives generally went along with them. Some of the last testimony came from Johnson, who characterized the Navy representatives as essentially just opposed to unification, a characterization that Vinson, apparently attempting to end the hearings, let go unchallenged. 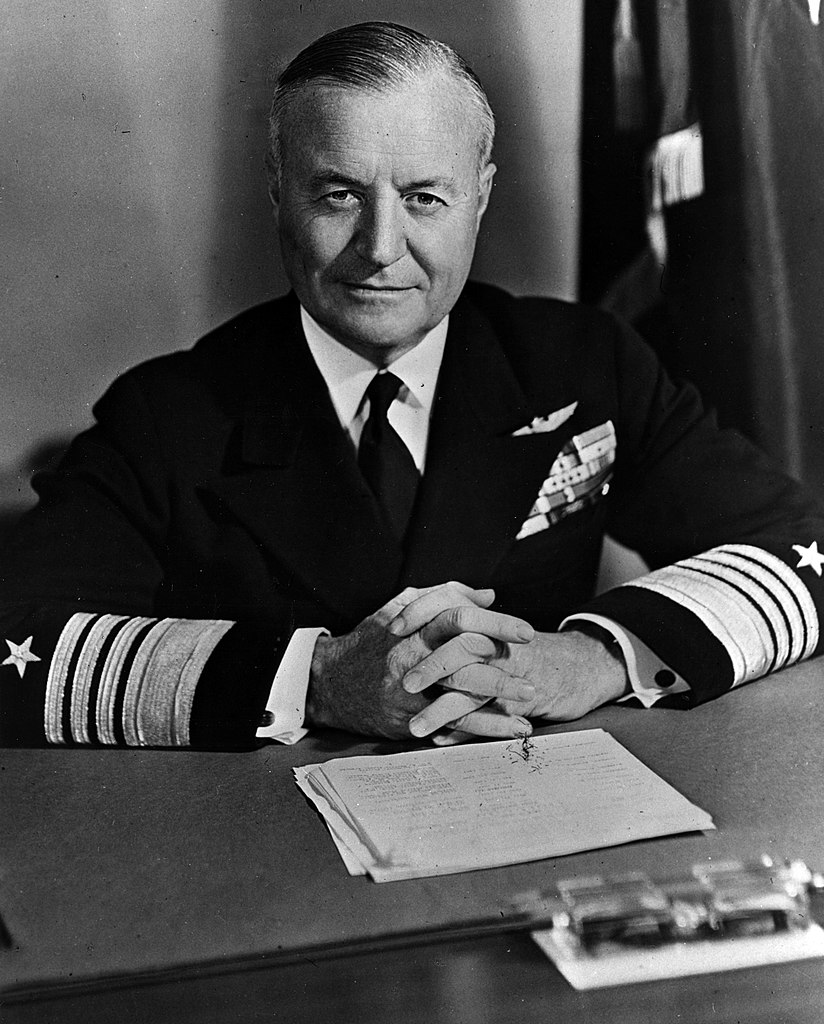 Matthews, a strong believer in toeing the party line, was furious at Denfeld, as was Johnson. Denfeld had apparently believed that Congressional supporters would protect him, but this proved a major mistake. Matthews, disregarding Vinson's instructions that all testimony be frank and without reprisal from within the DoD, had him fired, although under the pretext of a leaked memo dating from before the hearings. The announcement was made on October 27th, Navy Day, and without informing Denfeld ahead of time. Denfeld was offered a job in Europe, but declined, choosing instead to retire. Vinson was furious, but his ability to restrain Matthews was limited as Congress was in recess for the rest of the year. In Denfeld's place was appointed Forrest Sherman, one of the carrier admirals of WWII, but also a man ambitious enough to carry out Matthew's orders in order to secure the office of CNO. 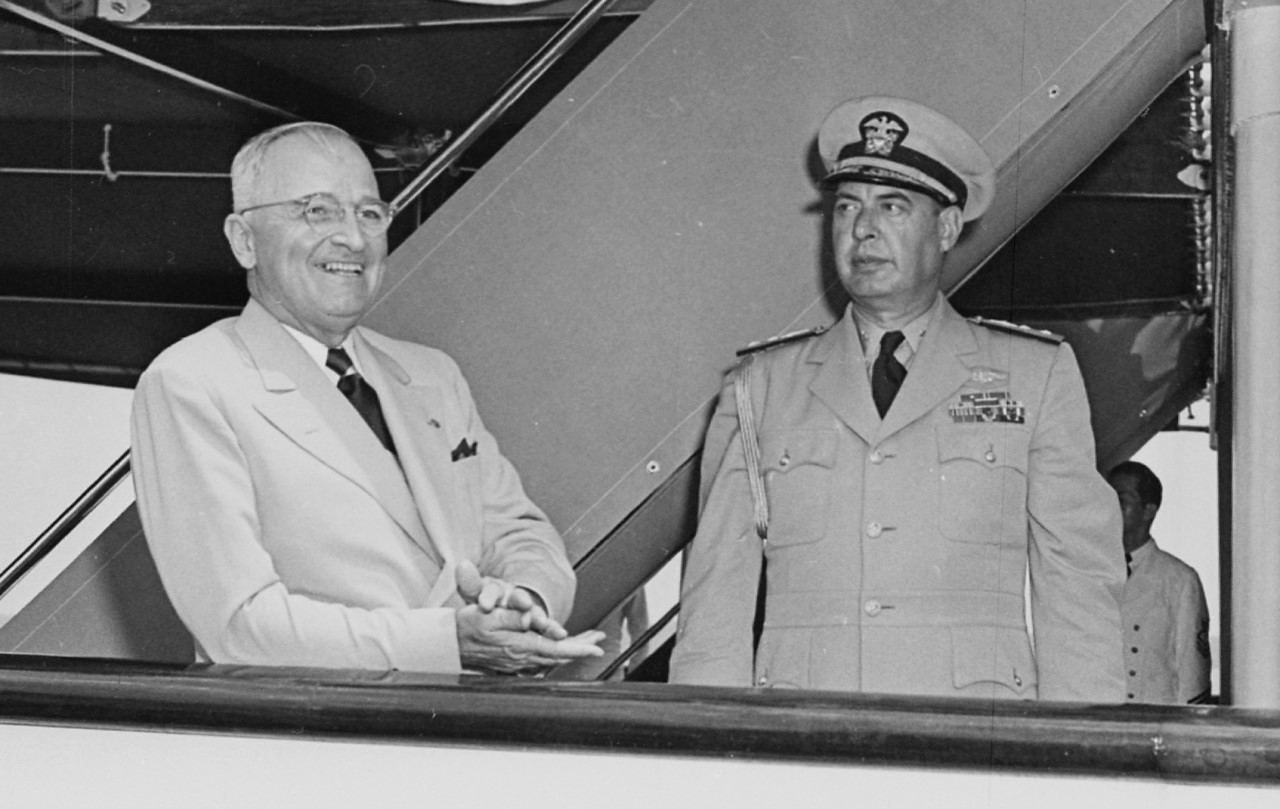 One of Sherman's first actions was to shut down Burke's OP-23, although he publicly praised Burke as one of the best officers in the Navy. Shortly afterwards, the board to select Captains for promotion to Rear Admiral met and all nine members nominated Burke. Matthews forced them to remove Burke, although President Truman asked his Naval Aide before signing it if it was a fair list, and the aide singled out Burke's being passed over as an injustice. Truman somehow talked Johnson and Matthews into reinstating Burke, although not before the press got wind of the situation and a public outcry arose. Several other officers had their careers scuttled, mostly those who had been far too outspoken in public for their own good. 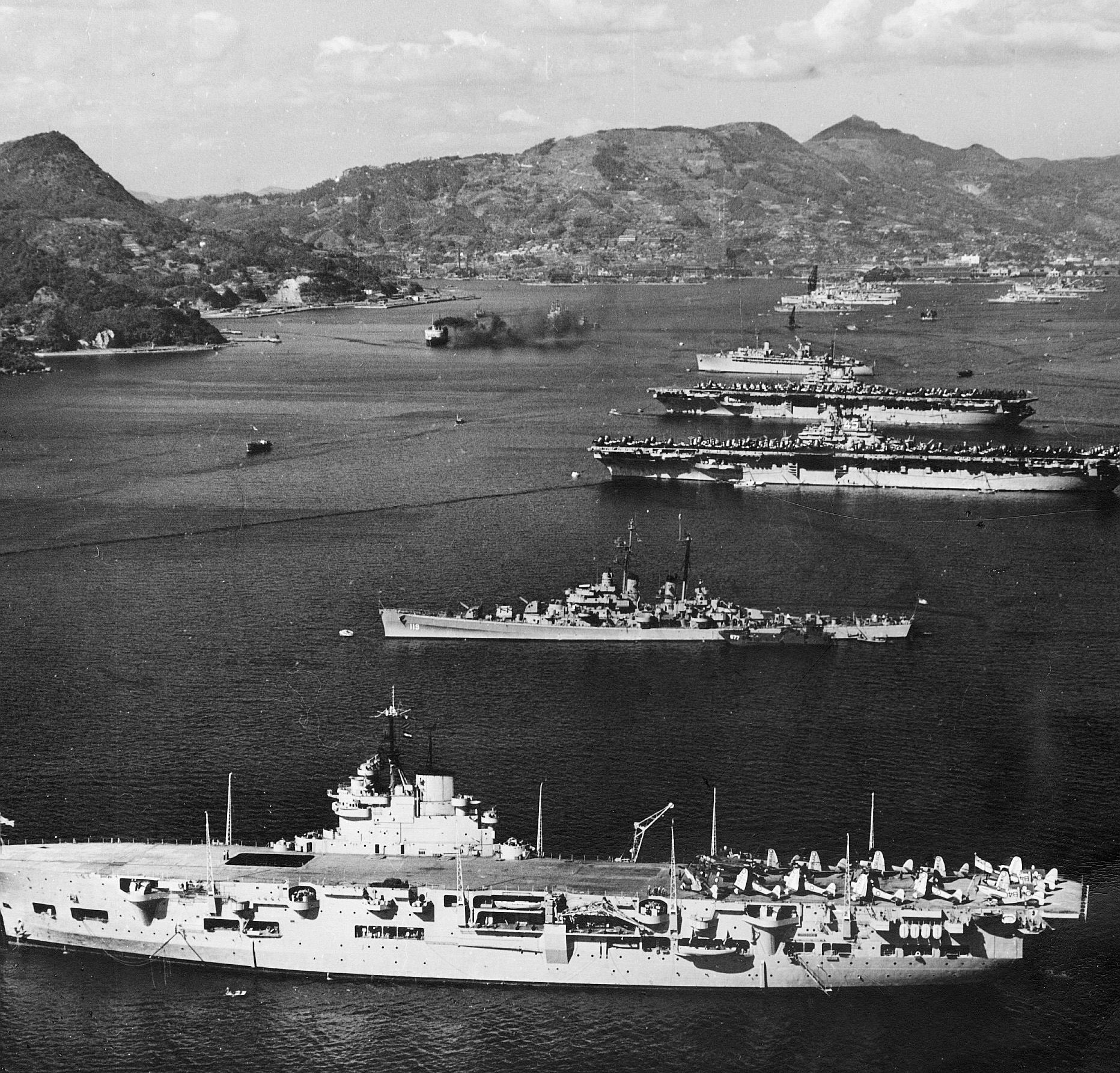 Carriers at Sasebo, Japan, in support of operations in Korea

Vinson's committee finally released its report in late February of 1950, a time when the Navy was facing the loss of 6 of its 14 carrier wings and 5 of the 11 carriers. It was a pro-Navy document, testimony to the efforts of Burke, Radford and Denfeld to put together a coherent vision for the USN in the atomic age. Sherman, an aviator himself, was willing to bide his time, and naval aviation as a whole was reprieved when Kim Il Sung's troops rolled into South Korea in June. Suddenly, the US needed to move combat power to the Far East as quickly as possible, and the aircraft carrier quickly proved to be the fastest way of doing so, independent of the constraints of land-based air. Truman, dissatisfied with Johnson's handling of the DoD, fired him in September, although Matthews lingered until June of 1951. The next supercarrier, named Forrestal after the first Secretary of Defense, was authorized in March 1951. Radford would go on to serve as Chairman of the Joint Chief of Staff from 1953 to 1957. In 1955, Burke, then a two-star Rear Admiral, was selected as the CNO, and went on to spend an unprecedented 6 years in that office, playing a key role in the development of the modern USN. Among other things, he was the driving force behind Polaris, which permanently assured the Navy a place in the nation's nuclear deterrent. 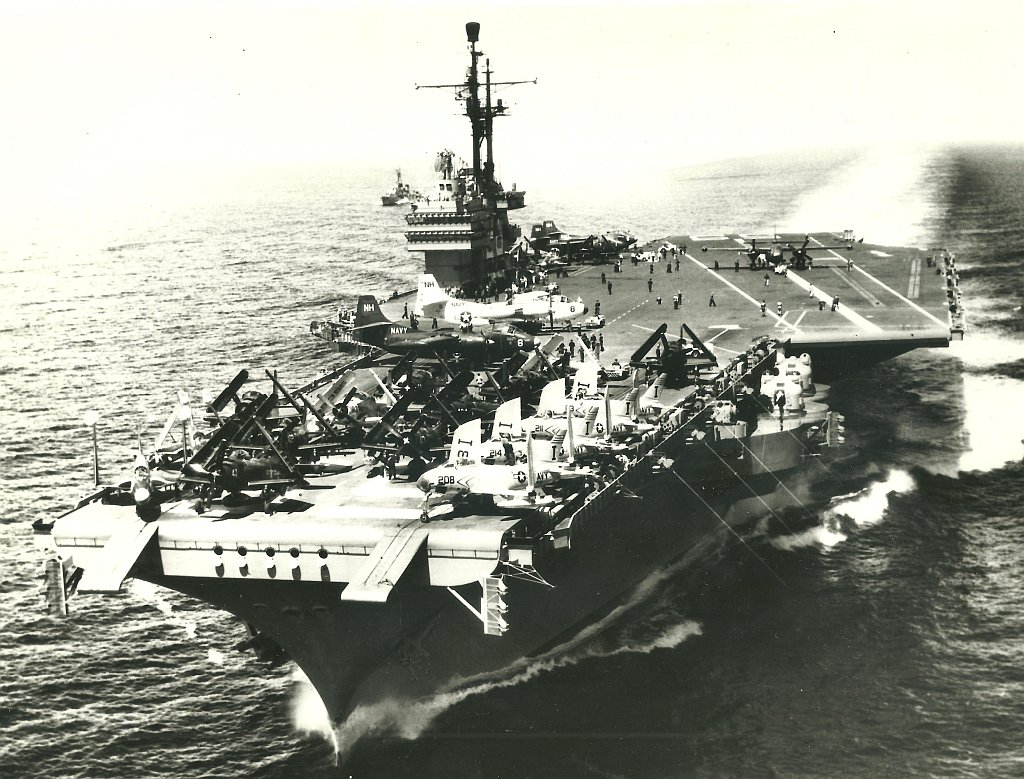 Forrestal on her shakedown cruise

Ultimately, the so-called Revolt of the Admirals was a key moment in the history of the modern USN. Never again would its institutional integrity be threatened in such a way. Instead, the 50s would see a series of successors to Forrestal, built to fight the nuclear strike missions that the Air Force had attempted to deny them, and ultimately the creation of the ballistic missile submarine fleet, which remains an important part of the nuclear deterrent today.