Last time, we discussed detecting submarines, but that was only the start of a process. Once a submarine had been detected, it still needed to be destroyed. At the start of the war, the only weapon was the venerable depth charge, essentially an explosive thrown over the side and fuzed to go off at a specific depth. However, as the war went on, the traditional depth charge, unchanged over the previous 20 years, became increasingly inadequate, and new and improved weapons were developed. 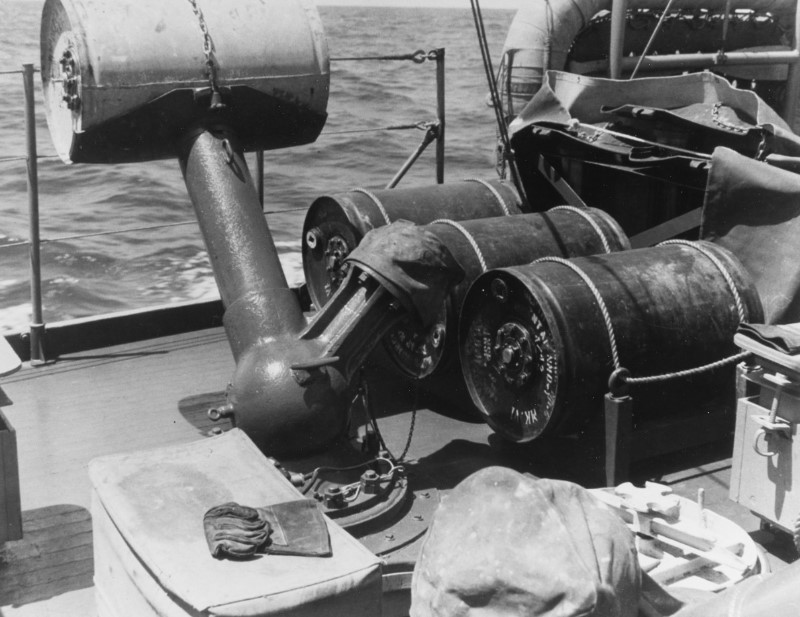 One of the biggest problems, even during WWI, with the traditional depth charge rack was that it only produced a narrow pattern. Submarines could estimate when a ship would lose contact, and then maneuver violently, hoping to dodge the pattern. During WWI, the USN developed the Y-gun, a device mounted on the centerline which threw two depth charges between 50 and 80 yards on either side of the ship. The biggest problem was that it consumed valuable centerline space, which was also in demand for guns and torpedo tubes. To solve this problem, the USN introduced the K-gun, which was essentially half a Y-gun, mounted on the railings. These were mounted in great numbers on destroyers and destroyer escorts during WWII. 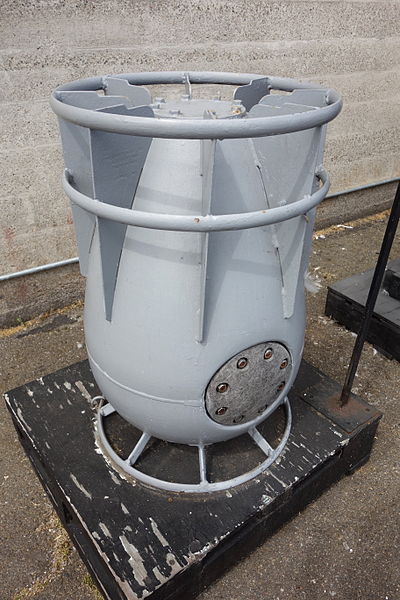 As submarine technology advanced, another problem arose. Depth charges sank relatively slowly (8-9 ft/sec), which meant that a deep submarine had plenty of time to dodge, even if the pattern was expanded by the use of K-guns. The first solution was to raise this about 50% by reducing the warhead by a third and adding lead weights. However, this was not enough, and the USN soon developed the Mk 9, which had a teardrop shape and a sink rate of 22 ft/sec. Most of the improved depth charges also had their hydrostatic pistols modified to include deeper settings, and by the end of the war, a 600 ft maximum depth was standard, twice what it had been in 1939. 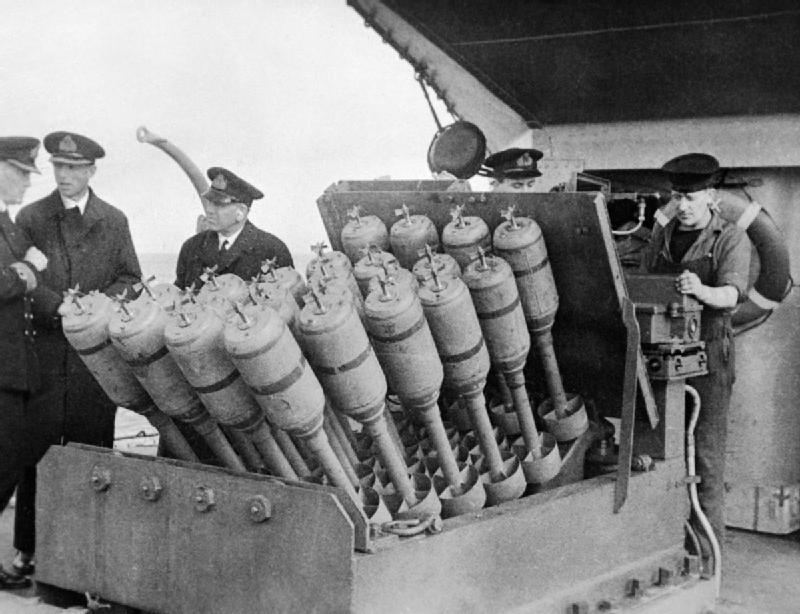 Of course, the ideal weapon is one that would attack targets ahead of the ship, before they passed into the sonar's blind spot. These were primarily developed by the British, and the first to reach active service was the Hedgehog. Hedgehog was a spigot mortar, firing a total of 24 65-lb projectiles at a fixed angle ahead of the ship. The 35 lb of explosives in each projectile would have been inadequate as a depth charge, but the projectiles were fused to go off on contact with the target, where it was more than adequate. A second bonus of using contact fuses is that, unlike conventional depth charges, a failed Hedgehog attack did not cloud the water with spurious echoes from clouds of bubbles. The US developed a rocket-powered version, known as Mousetrap, for ships which could not withstand the substantial forces generated by a Hedgehog firing. In British service, Hedgehog sank 47 submarines in 268 attacks, nearly 10 times the success rate of depth charges. 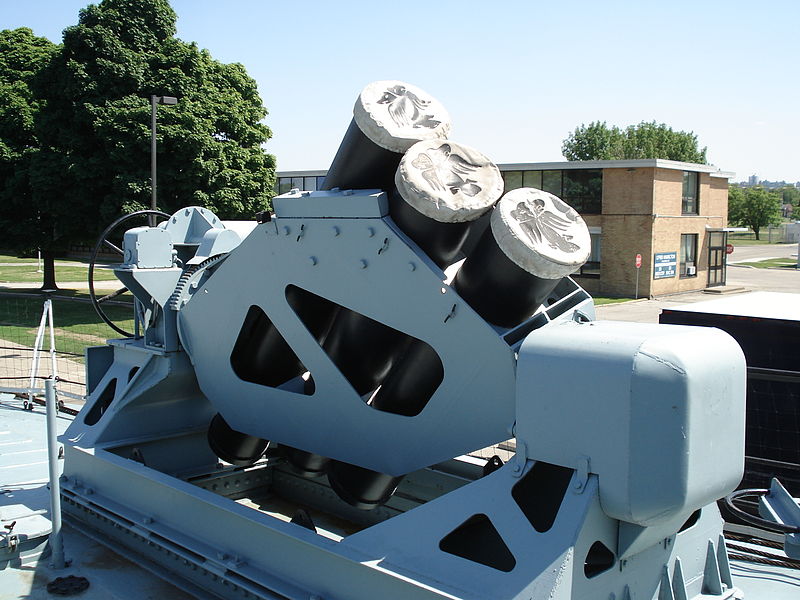 A Squid on HMCS Haida

The British also developed Squid, a more advanced weapon that threw a trio of 390-lb depth charges 275 yards ahead of the launcher, where they formed a triangle 40 yards on a side. They were fused like depth charges, but the sonar system automatically updated the depth settings until the moment of launch, reducing the risk of getting the charges at the wrong depth.1 Ultimately, Squid sunk 13 submarines in 50 attacks. The British preferred the Squid, the Americans the Hedgehog, probably as a result of the Americans having generally better sonar operating practices.

The most influential ASW weapon developed during the war was very different. It was an aircraft weapon, never used from surface ships: The Mark 24 mine. This weapon, also known as FIDO, was not a mine of any sort, and was only called that as a cover. It was instead an air-dropped homing torpedo, a truly remarkable weapon for the time. 19" in diameter and weighing 680 lbs, it was a viable substitute for the depth charges which had previously been the only option for aircraft attacking underwater targets. After being dropped into the water, it would circle, four hydrophones in the nose listening for the target. If it detected propeller sounds, it would steer towards them, attempting to equalize the signal between both the left-right hydrophone pair and the up-down hydrophone pair. The 340 torpedoes dropped by American and British aircraft were responsible for sinking 68 submarines and damaging 33 more, an incredible success rate for the time.

Rockets being loaded onto a Fairey Swordfish aboard an escort carrier

Depth charges remained an important part of the aircraft weapon inventory, although a serious limitation was the inability for most aircraft to set their fuses after takeoff.2 A submarine on the surface might be able to ride out a depth-charge attack, as the charges would be fused against a diving submarine. The primary weapon used against surfaced submarines was the 30-lb rocket, usually fitted with a solid-steel "warhead" to pierce the heavy pressure hulls of submarines. These would be fired just short of the target, hopefully punching holes below the waterline. Rockets were also used on the "retrobombs" fitted to MAD-equipped aircraft. MAD only detects targets directly below the airplane, which is a problem because bombs continue to travel forward with the plane's momentum after they're dropped. A retrobomb was fitted with a forward-facing rocket to more or less stop it in place, allowing it to hit MAD contacts. 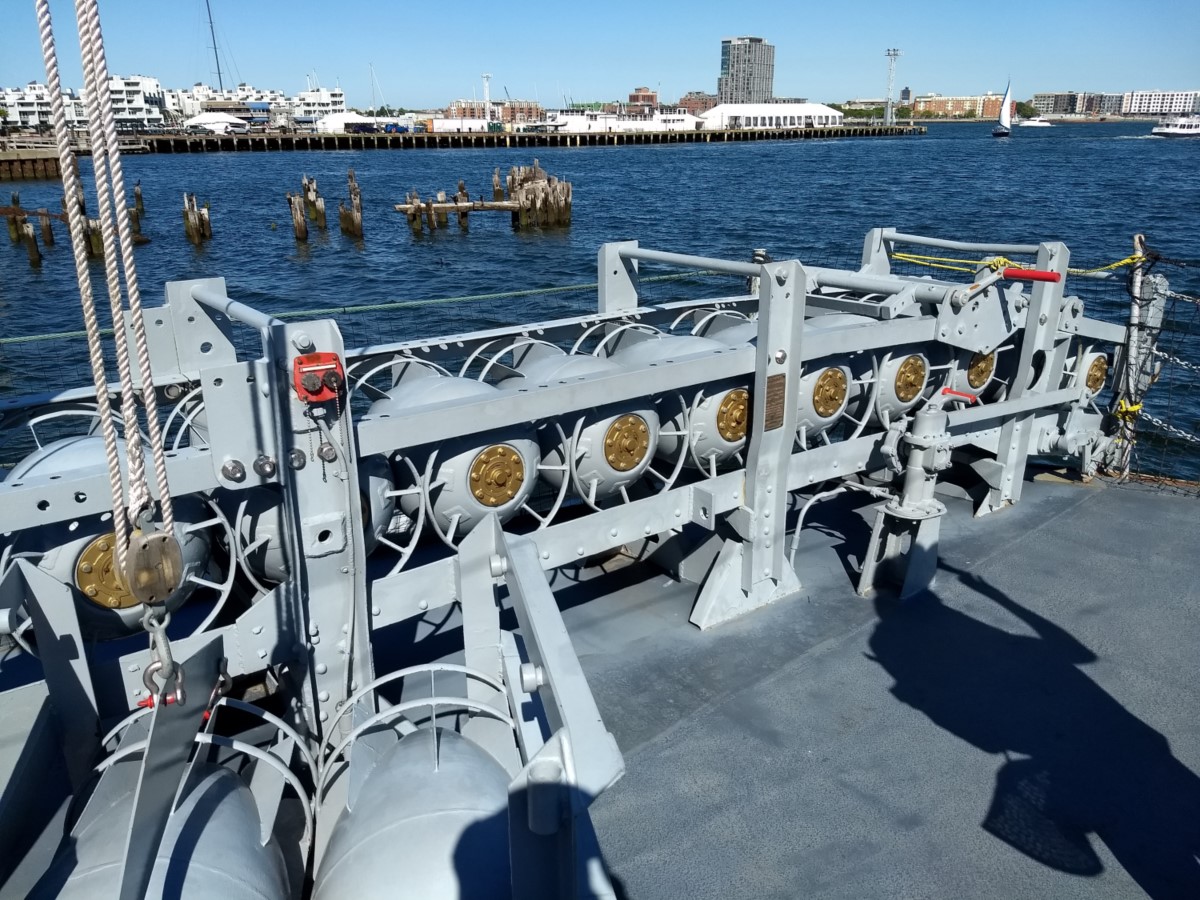 So far, we've covered the material factors of the anti-submarine war. However, these are only half of the story, and other, less tangible factors played an equally large part. Next time, we'll look at the methods the British came up with to make most efficient use of their forces.

1 The Japanese famously set their depth charges too shallow until mid-1943, when an idiot in Congress revealed this in a press conference, and other idiots published it. ⇑

2 I believe the Short Sunderland was an exception, as the bombs were stored internally and cranked out onto the wings by the crew. ⇑

3 My photo, from USS Cassin Young in Boston. ⇑

For more on WWII ASW, see Hunters and Killers, Volume 1 and Volume 2.