WWII saw the methods used in WWI for hunting submarines extended and expanded into a dizzying array of techniques and platforms that ultimately resulted in victory for the hunters in the Atlantic, and defeat in the Pacific. I'll start our look at WWII ASW with an overview of the forces employed, then look more closely at the sensors, weapons, and tactics used.

Much like WWI, surface ships formed the backbone of the war on the submarine. The best of these was the destroyer, also used as a torpedo platform and an escort for the fleet, both anti-air and anti-surface. Due to their versatility, destroyers were in high demand; they were never available in the numbers needed to screen the fleet and protect merchant shipping. Something cheaper and slower would be required to bear the burnt of the latter task, while the destroyers worked with other warships and acted as response units for the convoys. 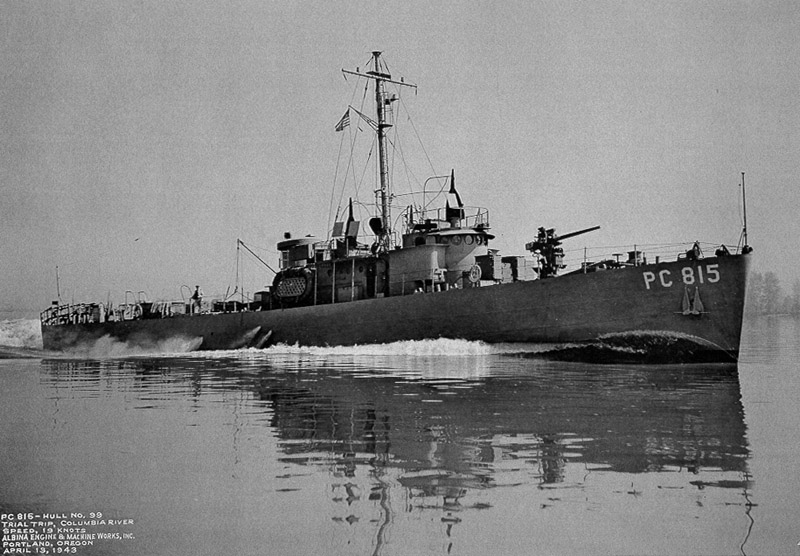 The low end of the escorts were the coastal patrol craft, sometimes called submarine chasers, such as the US PC-461 and PCE-842 classes.1 These were tasked with protecting coastal convoys, but lacked the range and seakeeping to be effective in the open ocean.

Originally intended to be part of this general category, the famous Flower class corvettes were sent into the mid-Atlantic by the increasing pressure of the U-boat offensive. They could be built by small yards unable to construct larger warships, and they held the line in the darkest months of the war, until better vessels could enter service. They were not popular vessels, underarmed, wet, and slow, but the British and Canadian3 navies made good use of them.

Above this were the ships variously known as sloops, frigates, and destroyer escorts. They were essentially budget destroyers, somewhat slower and more lightly armed, but with effective ASW armament and enough speed to hunt submarines on the surface. The US mass-produced them in great quantity, although mostly after the greatest threat had passed. Another source of this type of ship were conversions of WWI-era destroyers, usually trading boiler capacity (and thus speed) for greater endurance and additional ASW weapons. 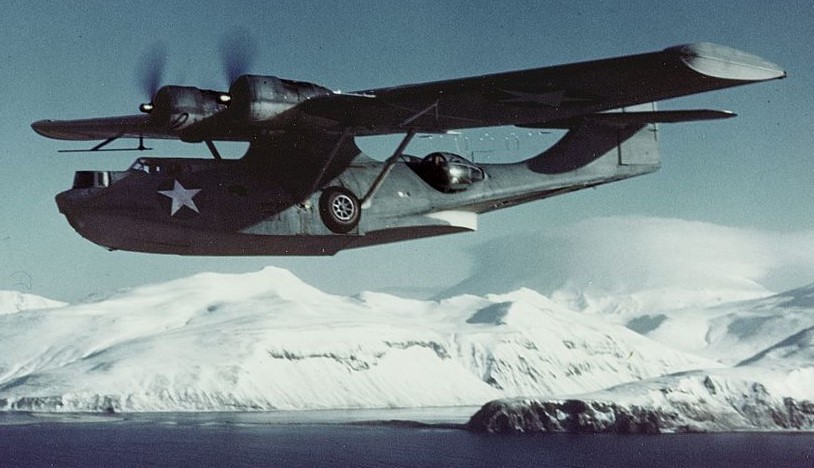 PBY Catalina in the Aleutians

Aircraft were not particularly effective against submarines during WWI, but came into their own during WWII. Previously, they had been restricted to good weather, and to operations near the coast, but improved technology meant aircraft like the PBY Catalina and Short Sunderland could provide air cover across most of the ocean. Initially, flying boats dominated, as they could be big and heavy without the need for expensive runways. As the war progressed and airfields were built in all corners of the globe, landplanes like the PB4Y Privateer took over.

Air cover was vital to the safety of convoys, as airplanes could force down submarines at a distance from the ships. Once underwater, submarines had only their very limited batteries to maneuver on, which usually meant that the convoy could get away. Unfortunately, due to a limited supply of long-range aircraft, there was a gap in the mid-Atlantic. To fill it, the escort carrier was developed. This was a merchant ship hull modified to carry about two dozen aircraft, usually a mix of fighters and torpedo bombers. Escort carriers also served in other roles, ferrying aircraft and providing support to invasions. 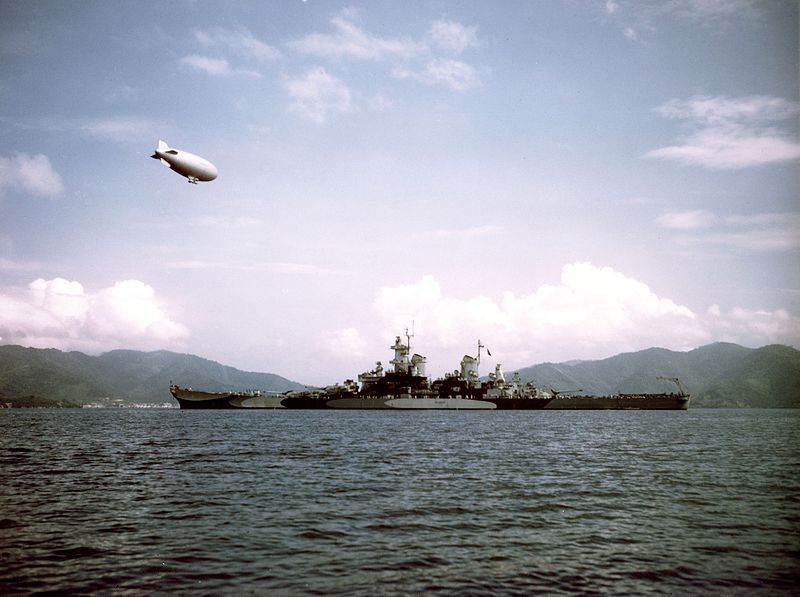 A blimp on patrol over the USS Missouri during her trials

Close to shore, other aircraft provided cover. The US used blimps, which proved largely ineffective, with no kills and one blimp shot down by a U-boat. Fixed-wing aircraft were also used, ranging in size down to the Piper Cubs used by the Civil Air Patrol. The Germans and Japanese both used rotorcraft5 in very limited numbers, although they were not particularly effective. 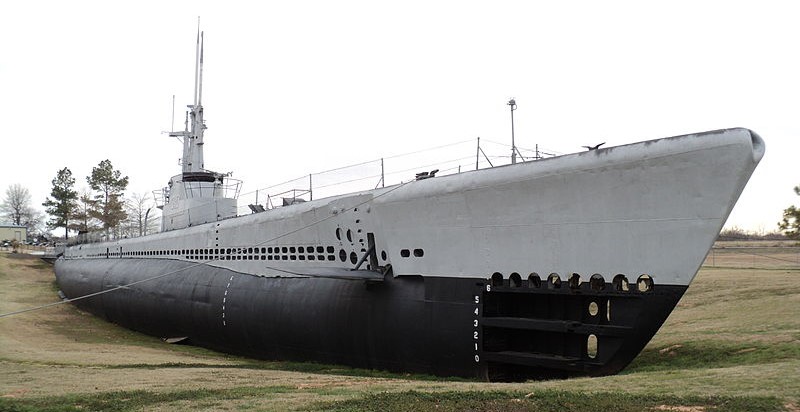 Submarines fought each other, too. The most successful of these was USS Batfish, who sunk three Japanese submarines in 76 hours off the Philippines, thanks to codebreaking giving away the route of a Japanese submarine supply convoy. Another notable action was that of HMS Venturer, who sunk a U-boat while both craft were underwater. This is the only case ever of one submerged submarine sinking another. That said, the improvements in surface and air ASW made submarines relatively less important in that role than they had been in WWI. 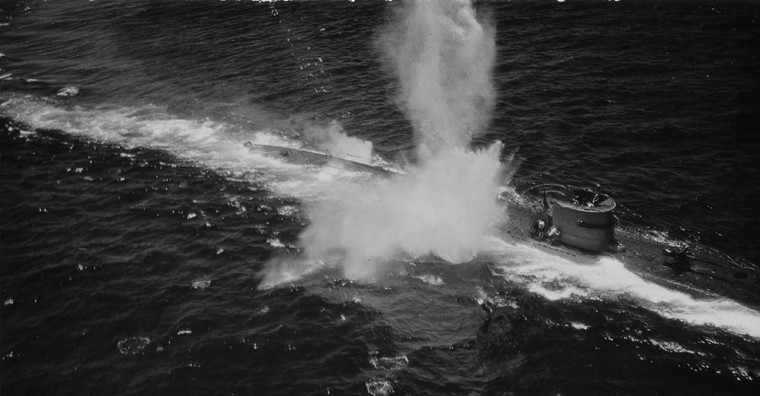 So how effective were these forces? A total of 1476 submarines were lost during WWII. 455 of them were to surface forces (30.8%), 354 (24.0%) to air attack, and 58 (4.0%) to a combination of the two. Submarines took out 69 (4.7%) while mines claimed 114 (7.7%). The balance were destroyed by accident, scuttling, or unknown causes. Different countries showed significant variations in the pattern of their losses. The US, for instance, lost twice times as many boats to surface attack as they did to aircraft,6 while the Germans lost 10% more to air attack. The Japanese ratio was 4 to 1, but they lost the most of any nation to submarines, a full 18% of losses. The Soviets suffered particularly heavily from mines, while the French submarine force was mostly scuttled to keep it out of German hands.

Over the next few installments on ASW, we'll look at the sensors, weapons, tactics and methods used to fight the submarines during WWII. It's a massive field, even without going into detail on the battles themselves.

1 I'm going to be focusing on Allied forces, for the usual reasons. ⇑

2 I promise that this is a real ship, and not one I made up. ⇑

3 The RCN was at one point the 5th-largest navy on the planet, despite operating nothing bigger than a few cruisers. They focused on providing escorts for the Atlantic convoys, and did a splendid and generally unrecognized job. This post previously claimed they were 3rd, but a reader pointed me to . ⇑

4 England is pictured here in recognition of her frankly astonishing achievements in the Southwest Pacific, sinking 6 Japanese submarines in 12 days. After the first few kills, other ships were sent in first, but they proved unable to hit the targets, and England had to finish them off. This is obviously the all-time record in submarine hunting in so short a time. ⇑

5 The Japanese made use of autogryos, while the Germans got a few actual helicopters into service. ⇑

6 Counting joint as half to each ⇑