Decommissioning wasn't quite the end of the story for Iowa and her sisters. The Marines wanted to retain the vessels for fire support in a future war, while most of the rest of the Navy wanted to get rid of them to avoid paying for their ongoing maintenance, and various groups wanted to turn them into museums. In 1995, all four were struck from the Naval Vessel Register,1 opening the way for them to be donated as museums. Congress was not happy with this, and in the 1996 National Defense Authorization Act directed that two of the ships be retained by the Navy. Originally, New Jersey and Wisconsin were selected to be reinstated, but pressure from groups in the state of New Jersey lead Congress to mandate that Iowa and Wisconsin be maintained, and Iowa was placed back on the NVR in 1999.2 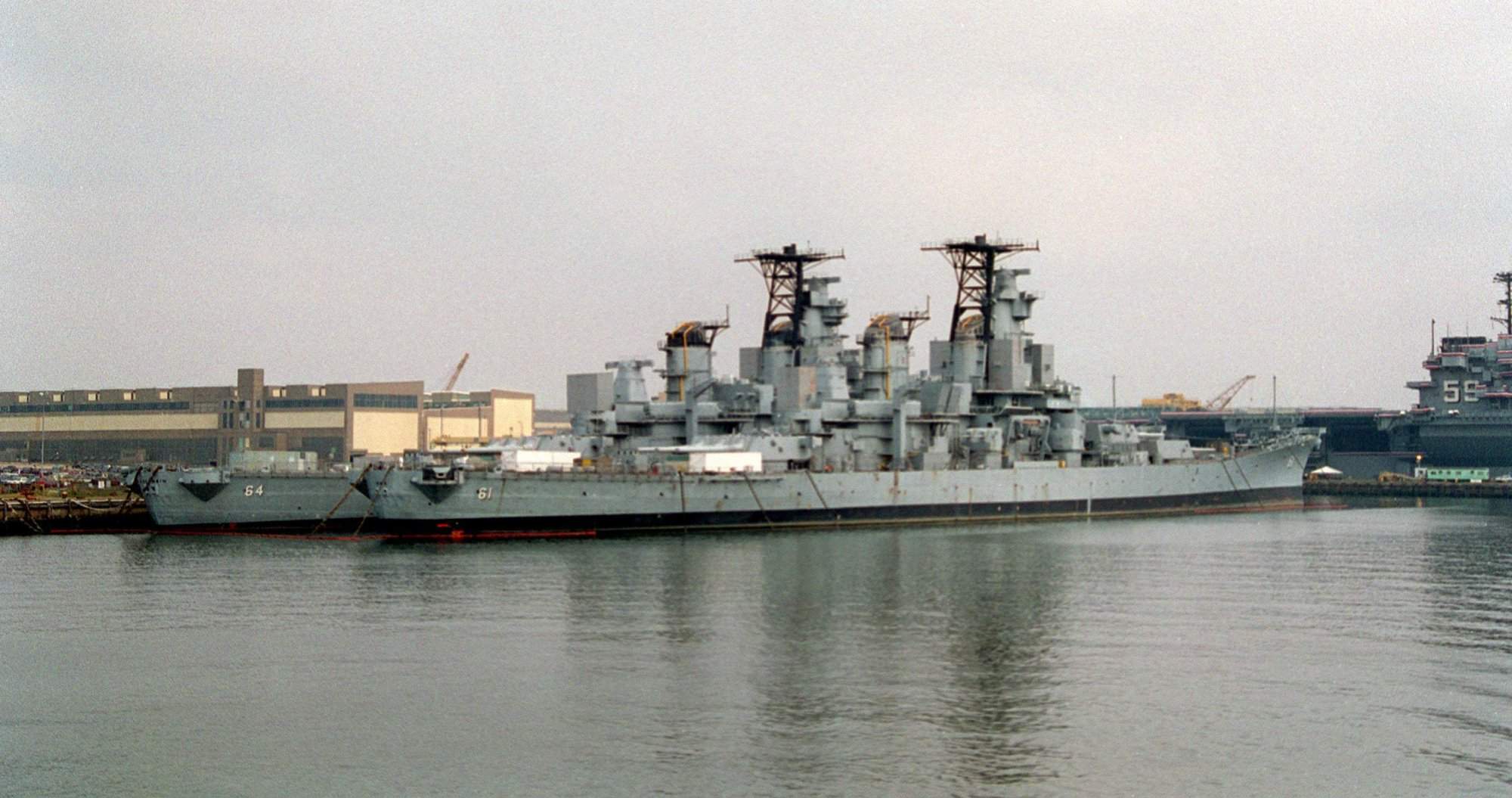 Iowa was originally stored at the Philadelphia Naval Shipyard, but was transferred to Newport Naval Station in Rhode Island in 1998 when Philadelphia Naval Shipyard was closed. In March of 2001, she was towed 5,443 miles to the Suisun Bay Reserve Fleet in California, passing through the Panama Canal for the last time. This was at the behest of the California congressional delegation, with an eye towards her eventual home as a museum ship in that state. 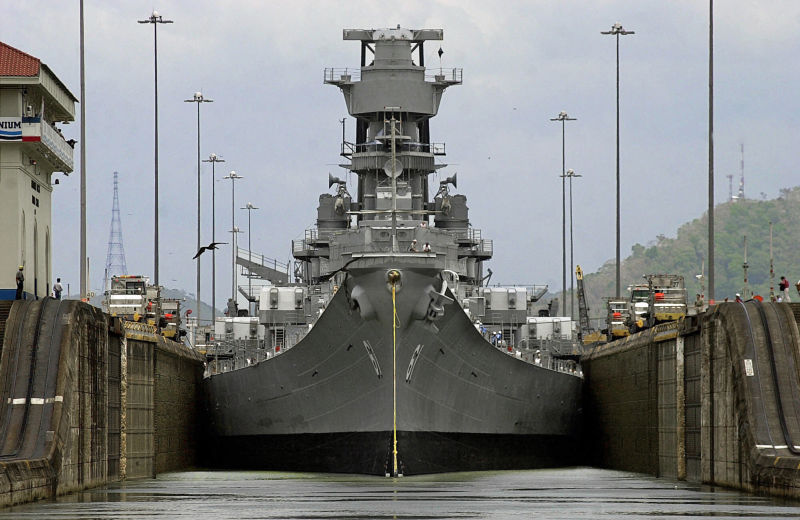 Iowa passing through the locks of the Panama Canal

In 2006, Secretary of the Navy Donald C. Winter struck Iowa and Wisconsin from the Naval Vessel Register, this time for good. Various advocates of heavy naval gunfire were dismayed, and Congress again mandated that the ships be maintained in a condition that permitted them to be reactivated should the need arise.3 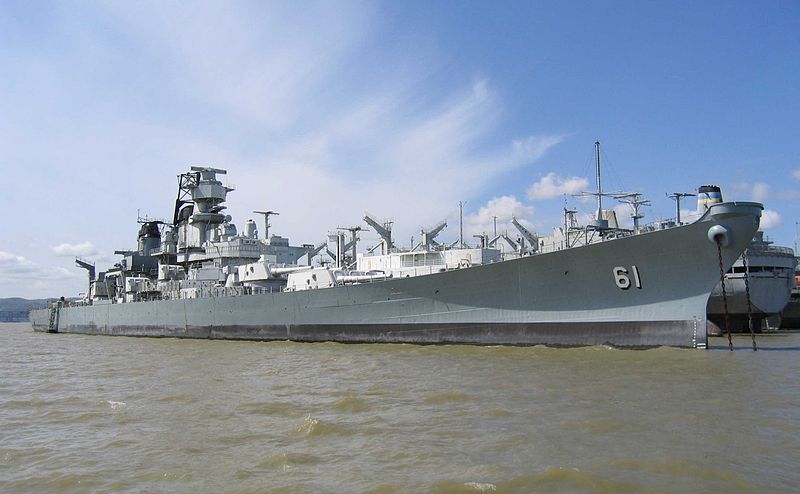 The initial proposals for the preservation of Iowa came from groups in the San Francisco Bay area, with plans to bring the ship to Stockton, Vallejo, or San Francisco proper being circulated. In 2007, the ship was awarded to Historic Ships Memorial at Pacific Square of Vallejo, who proposed to berth the ship at the former Mare Island Navy Yard. However, HSMPS was unable to raise the necessary money, and there was significant political opposition from elements in the Bay Area who apparently saw Iowa as a symbol of something or other that they didn't like.

In 2010, the Pacific Battleship Center began a campaign to bring Iowa south to San Pedro in the Los Angeles area instead. San Pedro had been home to the Navy's battle line from 1919 until 1940, when it moved to Pearl Harbor. That May, the Navy reopened the bidding, citing lack of progress on the part of HSMPS. With support from the City of Los Angeles, the PBC submitted its 1,180-page application on November 21st, 2010. 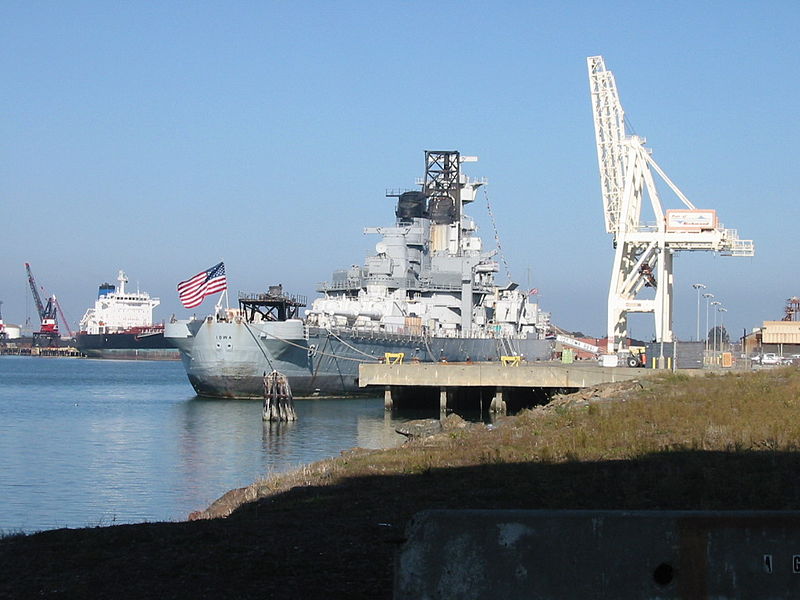 Iowa being prepared in Richmond, CA

On September 6th, 2011, USS Iowa was officially awarded to the Pacific Battleship Center, which immediately began the process of preparing the ship for her new home. She was towed to the port of Richmond, CA, where the refurbishment effort began. Originally planned to last 3 months, it ended up stretching for 9. The State of Iowa provided a $3 million grant, beginning a relationship between the PBC and the state that continues to this day.4 Over 3,000 gallons of paint was applied to the ship, covering 210,000 square feet. Finally, on May 26th, 2012, Iowa began the journey south, under tow by the tug Crowley Warrior. 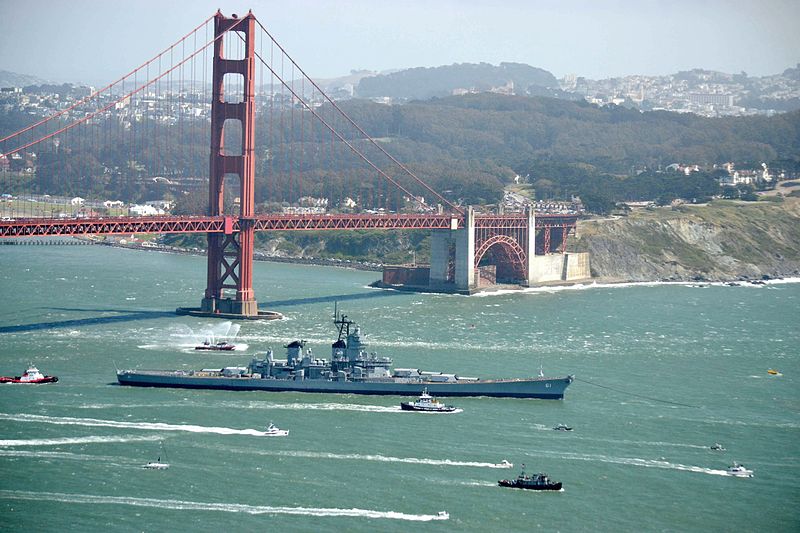 Iowa being towed under the Golden Gate Bridge

On June 9th, Iowa arrived at her new home, Berth 87 in the Port of San Pedro, next to the World Cruise Center. The official grand opening was on July 4th, 2012, although the ship was not open to the public until the 7th. She was the last battleship ever to be preserved, and the only one on the west coast of the continental US.

Over the years since Iowa has arrived in San Pedro, 1.25 million guests have visited,5 and the crew has worked hard to make her the best possible place to visit. Originally, very little of the ship was open to the public, but over time, new areas have been added to the tour route thanks to the efforts of the operations department. Iowa has been used extensively as a location for filming in movies and TV shows, and offers numerous programs and activities for visitors. These range from overnight camps for youth groups to STEM activities and the Full Steam Ahead tour, which takes visitors down to the engineering and fire control spaces. Iowa also serves as an important part of LA Fleet Week, an annual tradition that began in 2016. There's an active amateur radio group aboard, and the curatorial department works to preserve the ship's history. She's also host to an HUP Retriever, the only Korean War helicopter on display aboard a battleship. 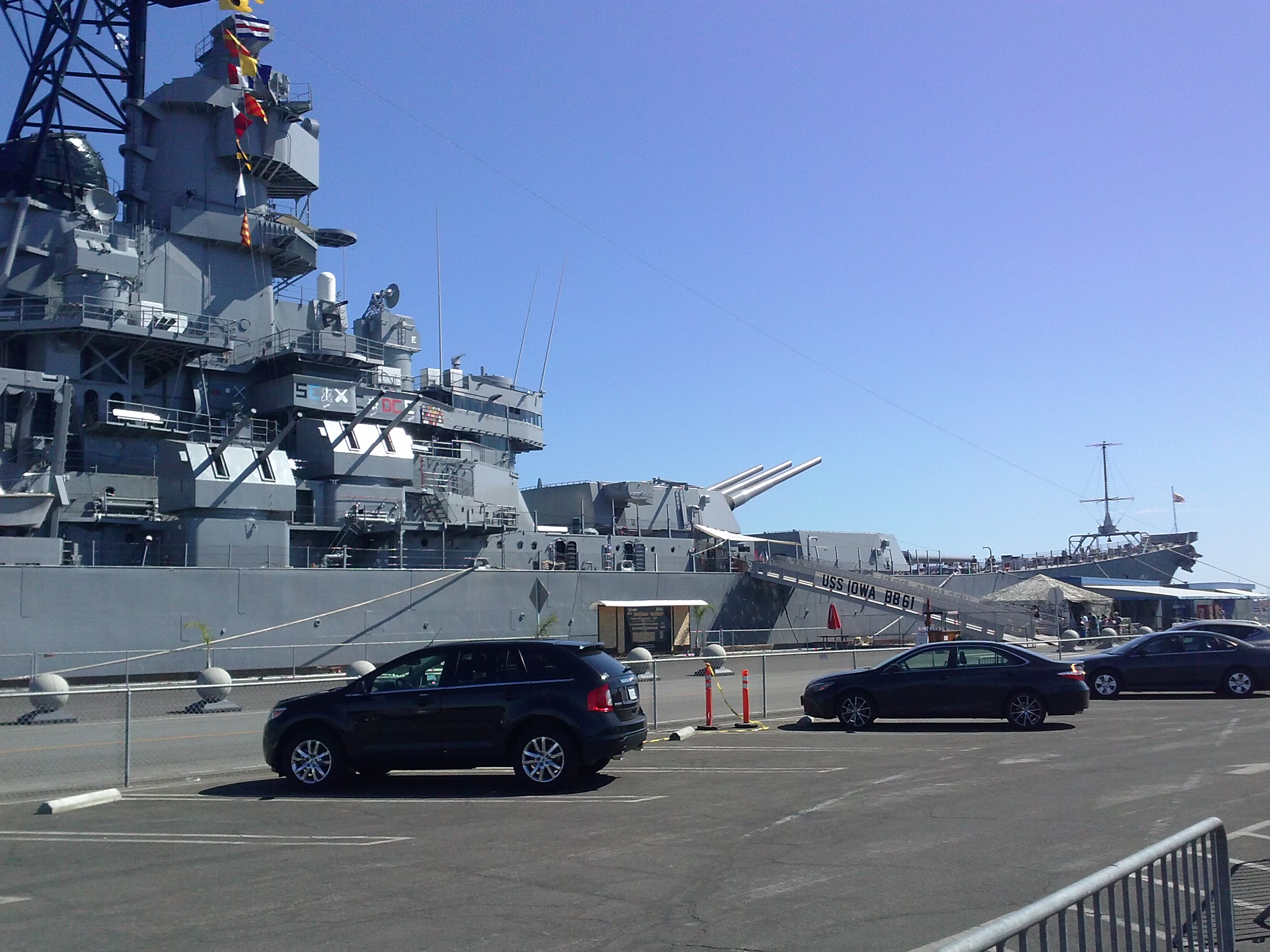 Over her 75-year history, Iowa has served in many roles. Presidential yacht, screening ship for aircraft carriers, shore bombardment platform, nuclear strike vessel, and instrument of American presence. In WWII, she received 9 battle stars for her service in the Pacific, although her brief stint in the Atlantic went unrecognized. Off Korea, she won two more stars. The 80s never saw her guns fired in anger, but they were busy years, including the worst day in her history.

Her 20 years of active service and 43 years in the reserve fleet are unmatched by any battleship save her sisters. She was the lead ship of what are indisputably the finest battleships ever built, and an important milestone in naval architecture. Today, she remains as a memorial to the men who served aboard, and to those who served with them. I was honored to have spent two years as a part of that history, and will always treasure the memories of my time there.

1 The official list of ships that the Navy has control over. Being struck means that the ship is no longer needed. ⇑

2 Missouri, as the location of the Japanese surrender, was slated to be a museum from the beginning. Iowa was initially excluded due to the cost of the incomplete repairs in Turret II. ⇑

4 In appreciation for their support, anyone with an Iowa driver's license gets free admission to the ship. ⇑