The main tasks of the naval engineer once oil and turbines had been adopted were making the existing plants more powerful and more efficient. The most obvious way to resolve the mismatch between the desire of turbines to turn quickly and the desire of the screws to turn slowly was to use gears.1 The problem is that transmitting tens of thousands of horsepower through gears is not easy.

The geared turbine first went to sea in large ships in 1916 with the three ships of the Courageous class, although they weren't technically battleships. This was necessary to allow them to make 32 kts, by far the fastest sort-of capital ships of the day. They also introduced new small-tube boilers, which were about 30% lighter for the power than the large-tube boilers in use previously. The first proper battleship followed a year later, when the USS North Dakota was refitted from direct-drive to geared turbines. But since there are very few details on that plant available,2 we'll look at the first battleship designed with a geared turbine plant, HMS Hood.3 She had separate high-pressure and low-pressure turbines on each shaft, along with astern blades in the low-pressure turbine casing. The outer shafts also had cruising turbines which could be clutched in at low speeds. At full power, the gearing reduced the 1500 rpm of the HP turbine and the 1100 rpm of the LP turbine down to 210 rpm at the shaft. Total designed power on each shaft was 36,000 hp, making Hood the most powerful ship afloat, although in practice turbines could be safely overloaded, and she made 32 kts using 151,600 shp on trials at a displacement of 42,200 tons. 24 small-tube Yarrow boilers produced steam at 235 psi, and 1,200 tons of oil could propel Hood 6,400 nm at 12 kts.

The USN took a different approach to solving the efficiency problem, turboelectric propulsion. In this, the turbines turned electrical generators, and the shafts were turned by electric motors. This was first used on the battleship New Mexico,4 followed by the units of the Tennessee and Colorado classes. It was planned for the 1920s South Dakota class, and used on the Lexington class battlecruisers, two of which became the US Navy's first big aircraft carriers under the Washington Treaty. New Mexico consumed about 20% less oil at 17 kts than her direct-drive sisters, but the major advantage of turboelectric propulsion was that it allowed greatly improved internal subdivision, so the Tennessee and Colorado classes had some of the best underwater protective schemes of all time. It also meant that the motors could be near where the shafts entered the ship, reducing the chances of shaft damage causing flooding. A less obvious advantage is that turboelectric power allows the props to be reversed instantly by switching the power around, and for full power to be applied in reverse5 and sustained indefinitely. 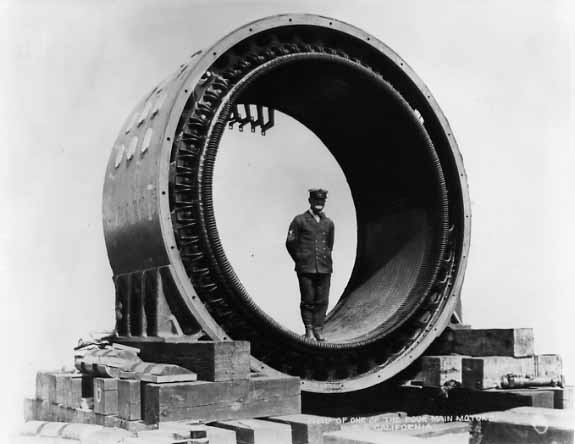 A motor winding from USS California

Turboelectric drive was not without its drawbacks. The most serious was that it was vulnerable to shock damage, which put several ships out of action during WWII, although power was usually restored fairly quickly.6 There were weight disadvantages, but they are often overstated: Lexington’s plant was of approximately the same size, weight and power as that of Hood, while West Virginia’s machinery was comparable to that of Royal Sovereign. However, turboelectric propulsion was not suitable for smaller ships,7 and the battleship holiday meant that development was focused on geared turbines. When new battleship designs were planned in the late 20s, turboelectric lost out on grounds of weight. It would have made the ship 20 ft longer and slightly wider, and cost a 21 kt design about 0.5" of deck armor. Later, during the studies leading to the North Carolina class, a turbo-electric plant was considered, but according to Dulin & Garzke, it was discarded as 180 tons heavier than the double-reduction geared plant ultimately chosen.8 The Germans, however, revived it with the intent of using it on the Bismarcks, although they switched to geared turbines before the ships were laid down. 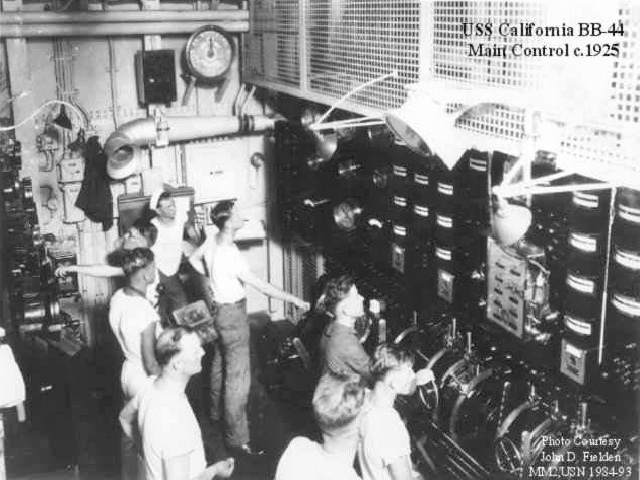 The control room aboard California

During the 30s, the temperatures and pressures used in power stations ashore climbed rapidly. In the US and Germany, naval turbines were built by the same firms that built them for use ashore, and steam plants gained rapidly in power and economy. The British bought their turbines from specialist naval engineering companies, and saw their traditional edge in that field reversed. The biggest innovation was the introduction of superheated steam. When water is first boiled, it is known as saturated or wet steam, because it remains at the same temperature as the water and retains some moisture. When steam is heated above the boiling point9 it is known as superheated or dry steam. Superheated steam carries more heat per unit mass, which in turn can be extracted by the turbines.

In the 30s, competition to the steam turbine began to emerge in the form of the diesel engine, although ultimately no battleships were built with them.10 Diesels offered improved fuel efficiency, particularly at low speeds, but they were too heavy and bulky to compete with steam plants in battleships. The Germans did use them in their Panzerschiffe of the Deutschland class, but these were essentially cruisers fitted for long-range raiding. The Japanese originally planned to use diesels on the Yamato class, but the test installation proved so unreliable that they abandoned them and switched to steam. The Germans actually developed diesels for their planned H-class, which would have had four engines on each of their three shafts. Each diesel would have produced 13,750 hp from 9 cylinders, a 65 cm bore and a 95 cm stroke. 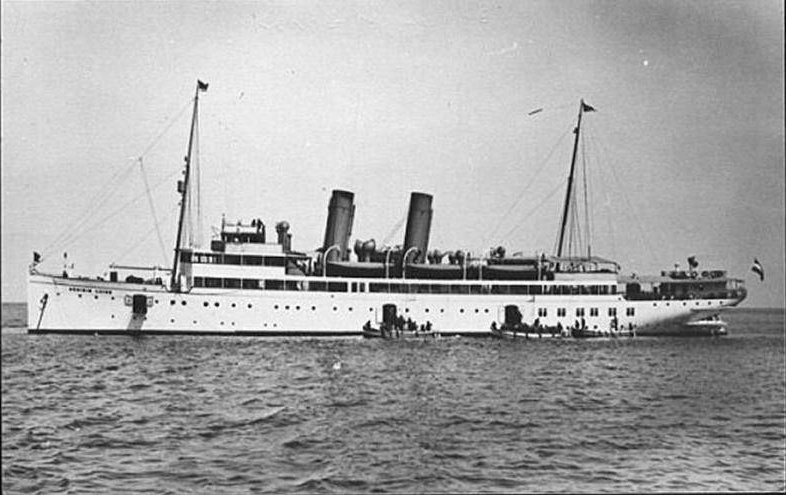 One minor note of some interest is the hydraulic transmission that was planned for the German battlecruiser Fürst Bismarck, although work on her never progressed very far. I have no details on this system, but it deserves a mention.

Next time, I'll examine Iowa's plant in detail, revealing the operating details of probably the pinnacle of battleship engineering. They'd come a long way from the days of trunk engines on the Warrior.

1 Interestingly, gearing was also used on the very first screw steamships because the engines in question turned too slowly, and had to be geared up. This went away fairly quickly as steam engines got faster. ⇑

3 Hood was essentially a fast battleship, despite the British classifying her as a battlecruiser. ⇑

4 The prototype was the collier Jupiter, which later became the USN's first aircraft carrier, Langley. ⇑

5 Normally, ships were limited in reverse power by the size of the reversing turbine, which was much smaller than the ahead turbine. ⇑

6 An evaluation of these incidents can be found here. ⇑

7 There were serious economies of scale in the equipment, so it was about equal for battlecruisers, slightly worse for battleships, and much worse for cruisers and smaller vessels. ⇑

8 Something smells off about this number. 180 tons is not a huge number when compared against the 2,580 tons of propulsion plant in the final ship. Unfortunately, Friedman doesn't give numbers on this. ⇑

10 Diesels had been planned for the center shaft of the German Prinzregent Luitpold of WWI, but they were never installed. ⇑